Guinness is served in well over 100 countries and brewed in around 50. According to the manufacturer’s site, over 10 million glasses of the stout are served daily around the world. But strangely enough, never in Vietnam. Until now.

Because just a few weeks ago, The Shamrock Irish Pub – located in charming, touristy haven Hoi An – served up Vietnam’s very first pint of the black stuff.

You read it here first.

It took 11 years and a very determined woman, but it’s here at last.

“An Irish pub should feel warm and happy, like home.” – Kieu, Owner of The Shamrock Irish Pub in Hoi An.

With Vietnam tipped to be the number one consumer of beer in all of Asia by 2020, its virginal Guinness-drinking status is somewhat of a surprise. Because enjoying a cold one is ingrained in the culture here; in a place where to nhau is both human and divine.

FYI: “Nhau” is the Vietnamese catch-all term for “drinking and feasting”, usually outdoors on teeny red stools, most of the time for no real occasion at all.

We’re not just talking lager, either – Vietnam is fast-becoming a craft beer delight, with new breweries and their creative offerings emerging all the time. Yet despite Vietnam’s fondness for a hoppy tipple, some Western suppliers haven’t quite cottoned on to the growing market.

An Irish Pub Without Guinness…

Perish the thought. An Irish pub without Guinness is like a shepherd’s pie without mashed potato. It just doesn’t make sense.

Fortunately, one woman was able to solve the problem of a Guinness-less Vietnam. A woman called Kieu, from a small village in the South Central Coast Region, who had a big dream.

The 36-year-old F&B entrepreneur was determined to stock The Shamrock – her Irish pub in Hoi An – with barrels of the black stuff for the first time in Vietnam’s history.

And she wasn’t giving up without a fight.

Birth of a Business: An Irish Bar in Vietnam

Kieu’s life as a bar owner began in Saigon where she ran an Irish bar in Thai Van Lung, the Japanese area of District One. Arriving in Hoi An four years ago, Kieu was inspired to start a business in the picturesque Ancient Town of Hoi An. She saw the potential in what was clearly a growing tourist destination. She then set about creating a place where tourists could feel at home. A place that could be home away from home.

“Everyone loves Hoi An – I love Hoi An. I realised the concept I could bring here… something new” – Kieu

Madam Kieu of Hoi An

Now owner of multiple Hoi An businesses, including Madam Kieu Restaurant, The Beer House, Kieu Garden Restaurant and Hotel Mangata Luxury Boutique Hotel, Kieu is testament to what hard work and self-belief can do. She shakes her head in disbelief as she recalls the teacher who warned her not to study too hard because a Vietnamese woman “could only work for someone, never be a boss.”

And even though she “never stops working” Kieu remains an entrepreneur at heart. The rush of a new project is what drives her. She’s no stranger to overcoming adversity, either – so when the challenge of how to bring Vietnam its first draught Guinness arose, she embraced it with relish.

Owning an Irish pub in Vietnam for the past number of years has been “very embarrassing” for Kieu. Because she would have to repeatedly tell thirsty Irishmen (and women) that her pub didn’t – couldn’t – serve draught Guinness.

She had to endure disbelieving comments and negative reviews all the time.

Today, Kieu – who doesn’t even drink alcohol, let alone Guinness – is proud to finally stock the black stuff: “The first day I got Guinness, I was smiling all day. I was so happy. I’d waited for so long.” The journey to bring Guinness to Vietnam took more than 13 countries and 11 years of struggle. But thanks to Kieu’s hard work and meeting the right person at the right time, she now transports the stout direct from Dublin to Hoi An.

A Lady Who’s Made of More

Guinness’ running tagline is particularly apt in this case. Not only does it apply to the tasty beverage, but to the formidable woman who finally brought Guinness to Vietnam.

So thank you, Kieu – for pouring the people of Hoi An their first pint of the black stuff. You’re made of more, too. 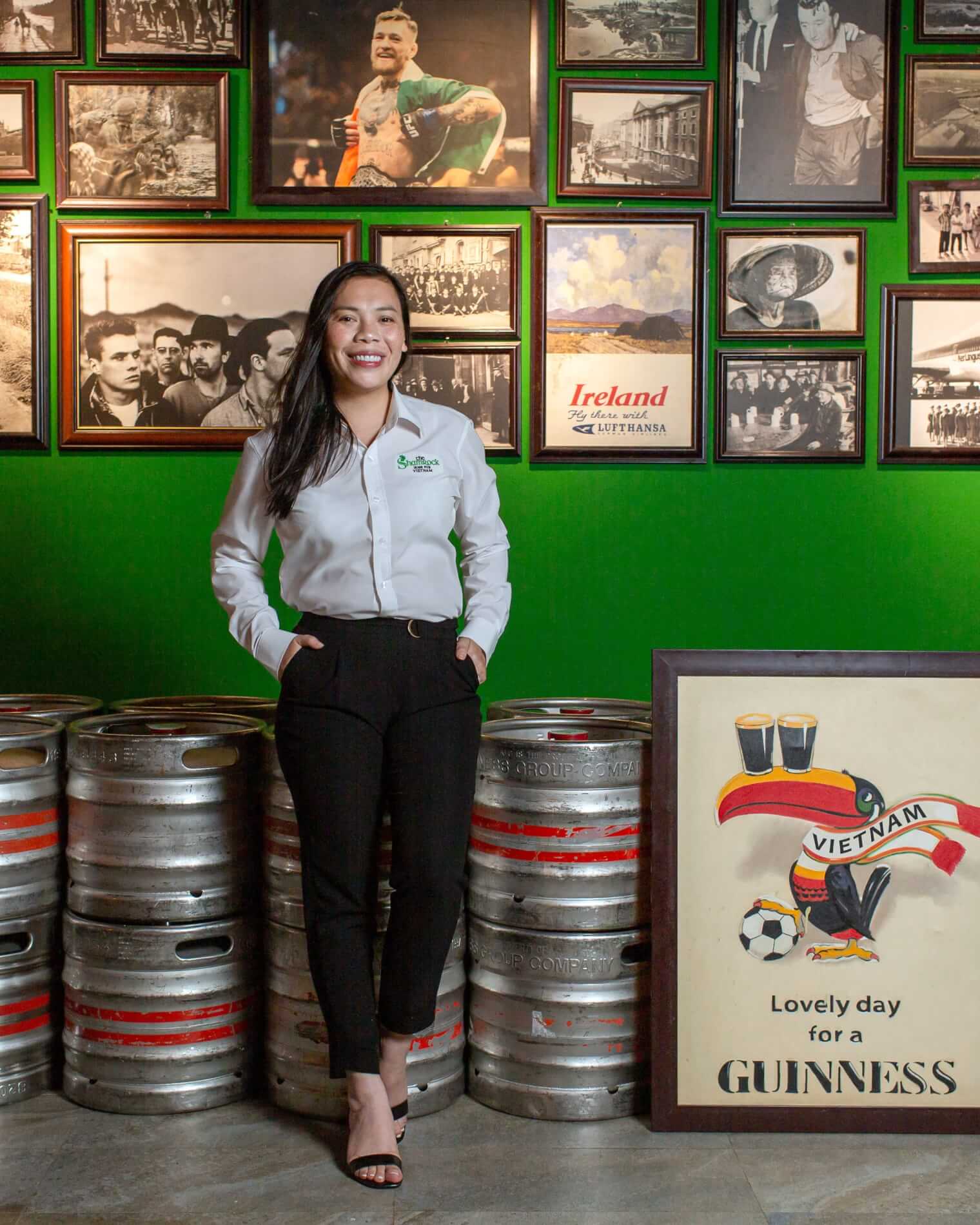 The Shamrock Hoi An
Kieu with barrels of the black stuff
+ 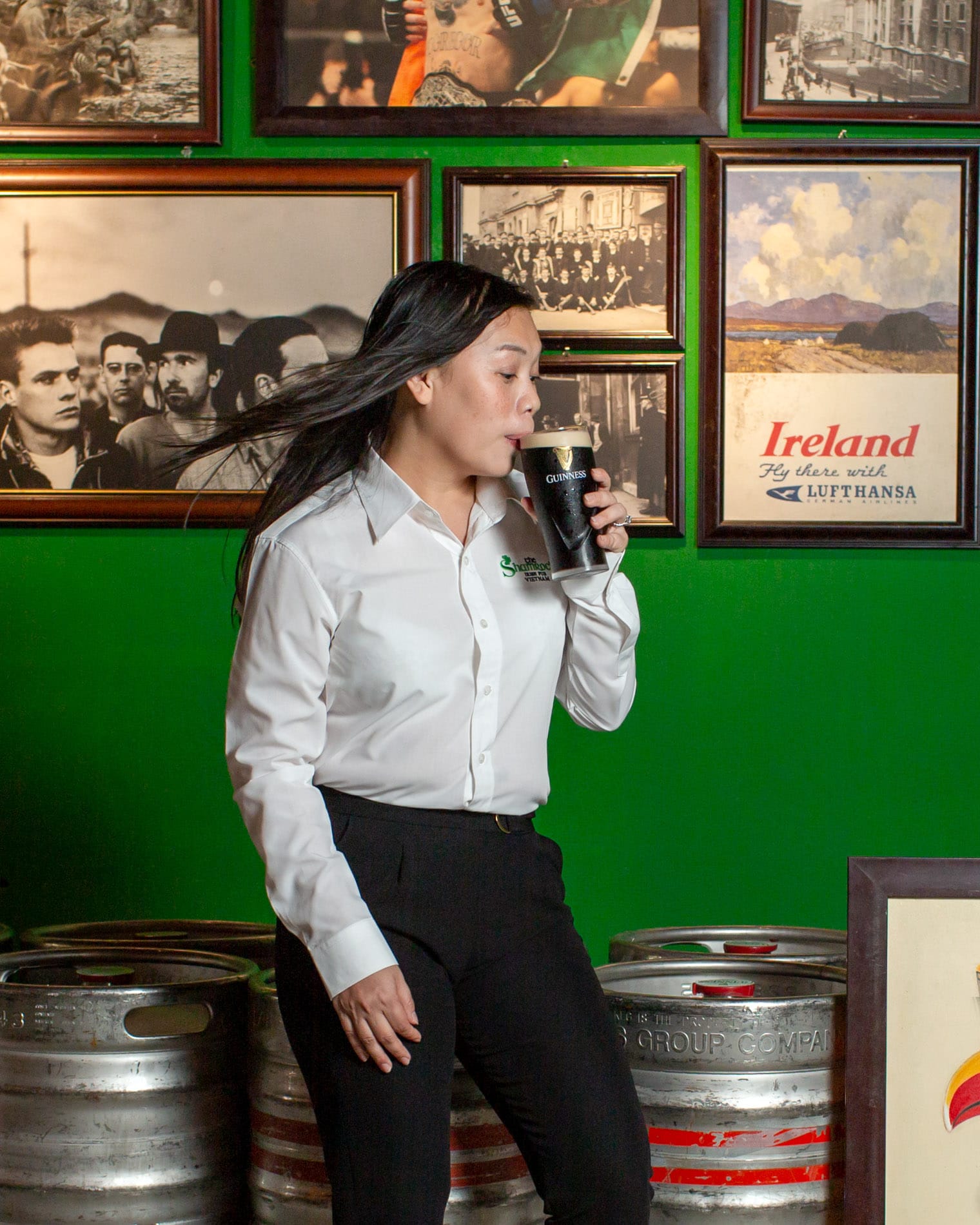 About The Shamrock Irish Pub in Hoi An

The Shamrock Irish pub is located on An Hội Islet, across the water from Hoi An’s Old Town. The pub opens onto Hoi An’s walking streets and its large balcony looks out over the picturesque riverfront. Designed to feel like a real Irish pub – where families are welcome, singing is encouraged and the craic is mighty – it’s more than your average sports bar. Enjoy live music daily and a range of classic Irish pub dishes including Beef & Guinness Pie and Traditional Lamb Stew. Daily Happy Hour from 4–7p.m.

Emma Sothern is an Irish expat living and working in Hoi An. When she’s not drinking Guinness, she’s writing for this hair loss website that she set up to support women and men living with alopecia. Follow her on Instagram: @lady_alopecia

Cycle the Hoi An Countryside 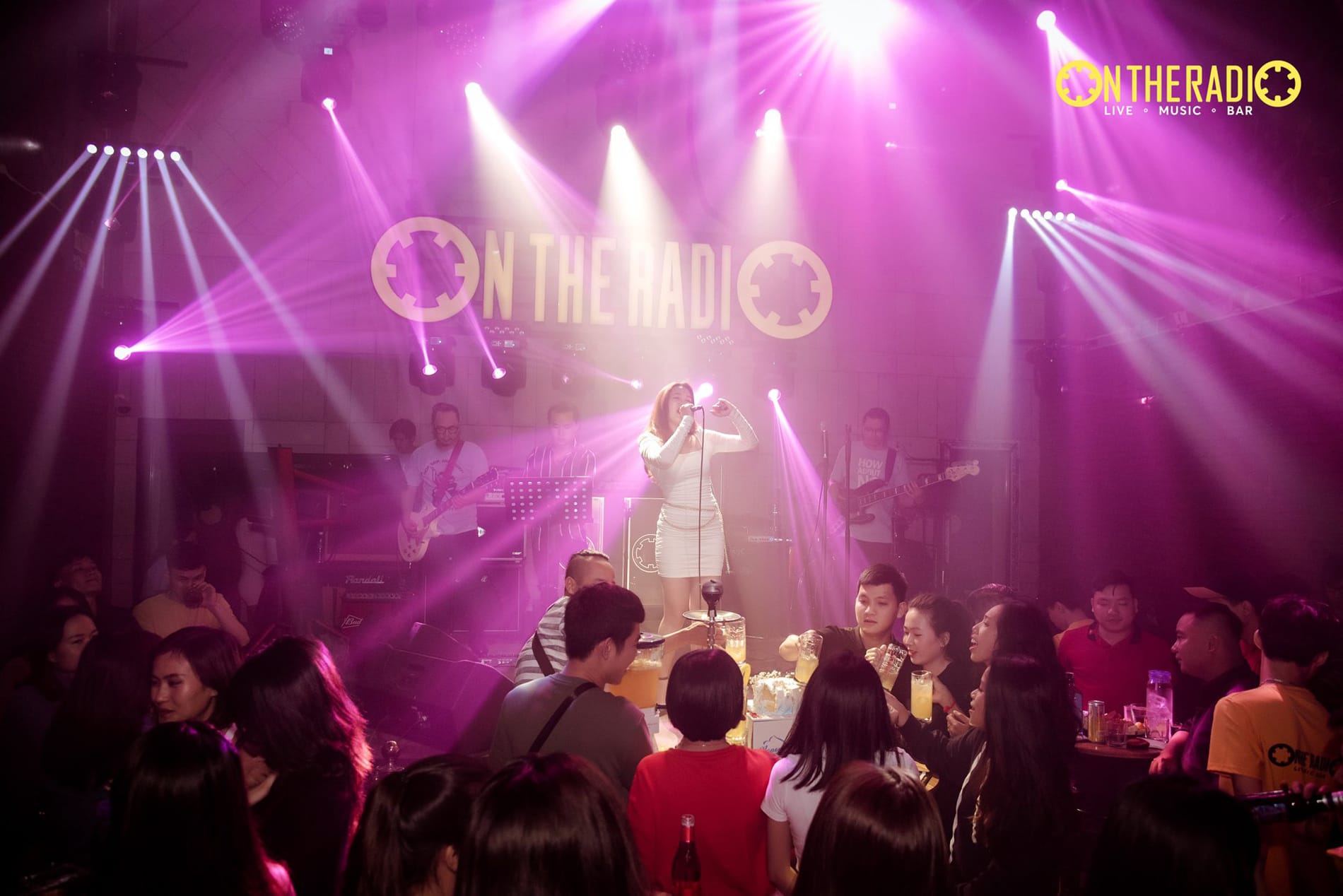 Da Nang Nightlife: What to Do in Da Nang City at Night 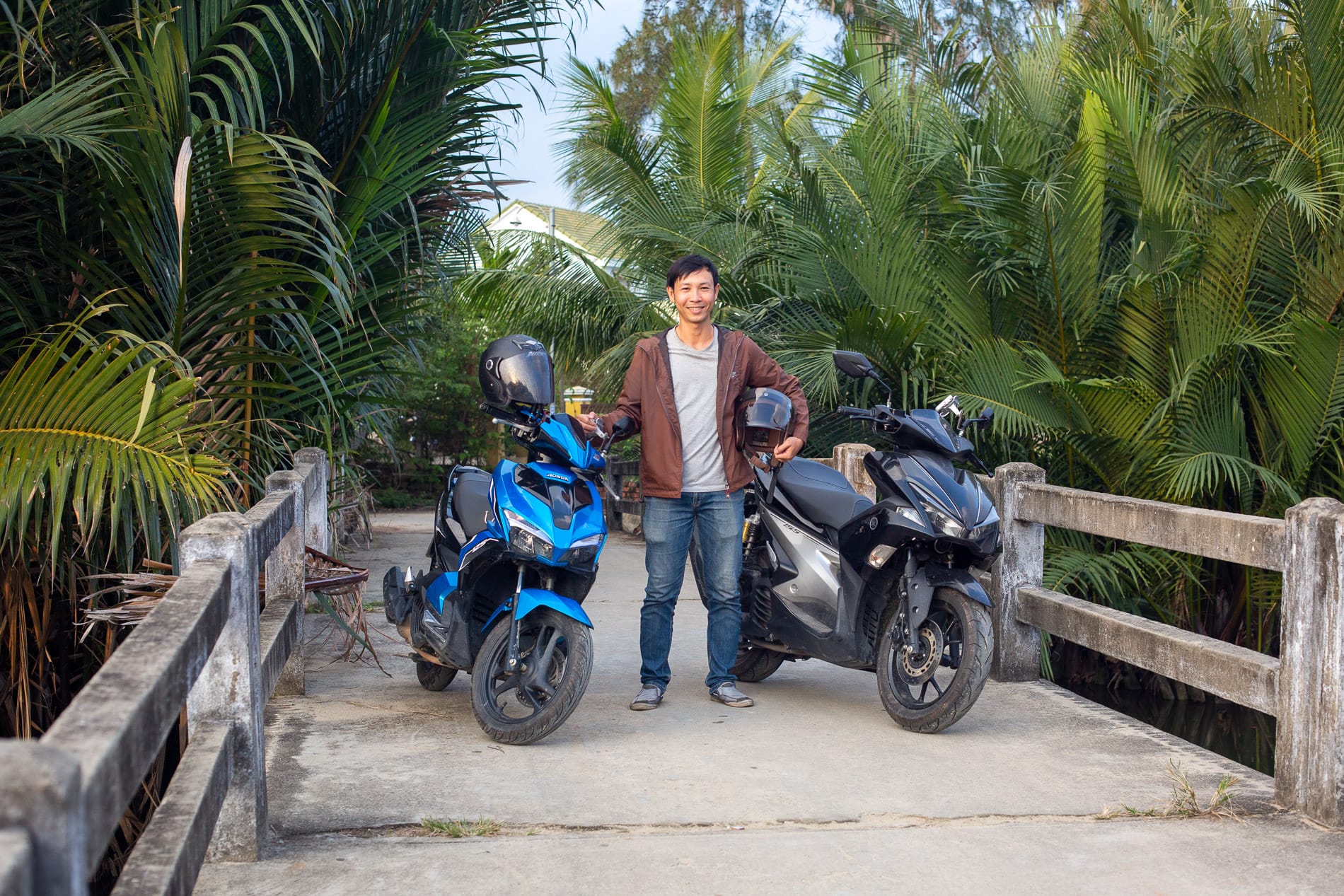 Hoi An Bike Rental: The Motorbike Rental Shop With a Difference 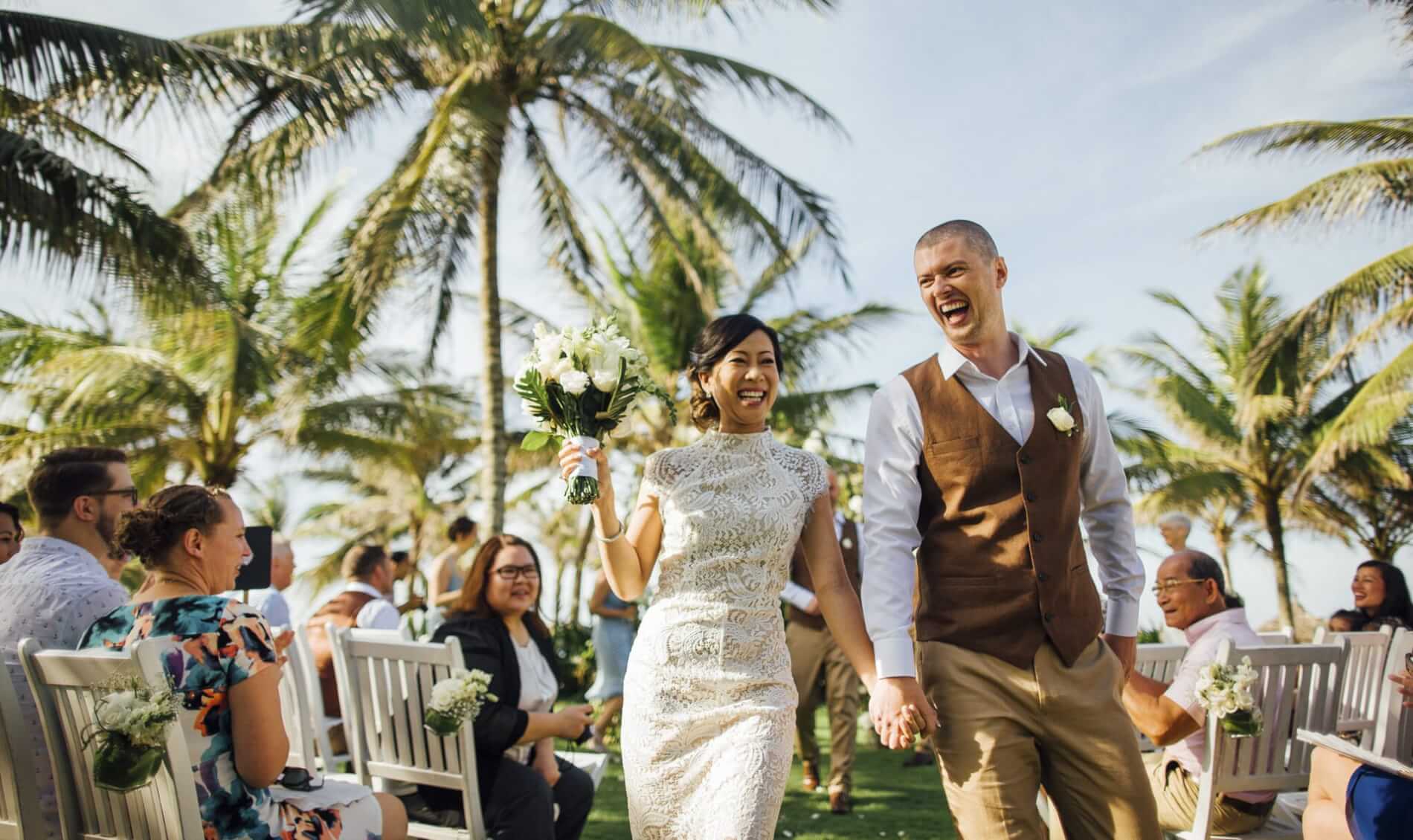