Approaching Da Nang’s city centre, it is impossible to miss the majestic golden fire-breathing Dragon Bridge that snakes across the Han River. Known as Vietnam’s ‘City of Bridges’, Da Nang’s urban landscape has transformed over the last decade and continues to flourish. It has become renowned for its collection of uniquely designed bridges throughout the city. The Dragon Bridge (Cầu Rồng), has attracted worldwide attention with its imperious design emulating the shape of a dragon.

The dragon’s head erupts with fire bringing it to life during an impressive show.  Best of all it takes place every weekend, for free! There’s a range of options for watching this incredible fire show.  This spectacular structure attracts millions of visitors every year and has become an iconic symbol of Da Nang city. Hidden’s guide gives you the best insider tips for visiting the Dragon Bridge.  Along with the top locations for watching the weekly fire show.

Timings: Every Saturday and Sunday at 9.p.m

Architectural Design of the Dragon Bridge in Da Nang

The Dragon Bridge opened in March 2013 after two years of construction, to commemorate the 38th anniversary of Da Nang’s liberation. This six-lane bridge is 37.5 metres wide, 66 metres high and 666 metres long, making it the longest bridge in Vietnam.

Hidden Hint: The consistent appearance of the number six is no coincidence in the creation of this city icon, with six being regarded as an auspicious number in Vietnam, bringing good luck and fortune.

Da Nang is the largest city in Central Vietnam and a principal port city, therefore it is a critical transportation hub. Not only does the Dragon Bridge provide the fastest link from Da Nang’s International Airport to its city centre, but it connects other main routes across the city, highlighting its importance.

Designed by architectural group Luis Burger the Dragon Bridge emulates the shape of the dragon from the Ly Dynasty – a significant power symbol. This inventive design is not only a reflection of Vietnamese customs and beliefs but also highlights Da Nang’s growth and development.

The Dragon Bridge has an impressive light display, containing over 2,500 LED lights that light the sky and reflect off the river every night.  Thus making it impossible to ignore this magical structure. The bridge attracts millions of tourists every year, that not only come to see the fascinating design but flock to see the unique fire-breathing show. This show impressively brings the golden dragon to life breathing fire and spraying water. It captures the attention of everyone around. The best thing is that it takes place every weekend and on special occasions and it’s totally free!

The Dragon Bridge is located in the heart of Da Nang, at the Le Dinh Duong/Bach Dang traffic circle. This 1,864 foot long bridge stretches across the Han River boasting spectacular views of Da Nang’s landscape. Da Nang, the largest city in Central Vietnam is one of the country’s principal port cities. The bridge plays an important role in the city’s improvement of urban transport infrastructure, connecting to many main routes across the city.

It also provides the fastest link from Da Nang International Airport to the city centre and serves routes to My Khe and Non Nuoc Beach. Its strategic location means that visiting the bridge is very accessible wherever you are based in the city. The fire show, in which the Dragon’s head breathes both fire and water in a spectacular display every weekend is located on the ‘beach’ side of the bridge, therefore, it is important to keep this in mind when travelling there.

The Dragon Bridge Fire Show is an unmissable experience for any visitor to Da Nang. This already fantastically illuminated bridge becomes even more magnificent once the show is underway. Crowds gather at the sides of the Dragon Bridge to witness the dragon breathing fire in this incredible fire show. Following the fire show there is an illuminated water show to cool things down as the vibrant bridge changes colour multiple times.

The show happens every Saturday and Sunday night from approximately 9.p.m and also on special occasions. It lasts for approximately 15 minutes.

Hidden Hint: The show lasts less than 15 minutes! Therefore be on time or you run the risk of missing the dragon breathing fire!

Bridge traffic stops approximately 10 minutes before the show. Meaning during this time no vehicle can cross the bridge. Motorbikes can park on the Dragon Bridge for the show. However, arrive at least 20 minutes before the show and get your spot, thus avoiding being stopped before reaching the bridge. If you are travelling to the show via a car or another mode of public transport try and get there about an hour earlier to avoid traffic and congestion.

Where to Watch the Dragon Bridge Fire Show in Da Nang

On the Dragon Bridge

Standing on the Dragon Bridge is the closest way to observe the fire show however, it does get very busy. The sides of the bridge often become crowded over an hour before it even begins.  With visitors hoping to find the best spot to observe the show. Hidden suggests getting there no earlier than 20 minutes before, this gives you enough time to find a good spot but avoids waiting around for a long time. After the dragon breathes fire, it sprays water therefore, if you do not want to get wet, avoid standing too close!

Hidden Hint: Just underneath the bridge, you can find a few small stalls which sell an array of drinks and snacks that you can purchase to watch the show.

Not bothered about watching the fire show up close?  Then there are a vast range of rooftop bars available to choose from.  They all offer fabulous views of the fire show along with spectacular views across Da Nang’s city landscape.

Capturing the show from a height has the added bonus that you have a view of the colourful lights reflecting across the water of the Han River.  Hidden suggests two rooftop bar options below. However, there are plenty more rooftop bars from which you can capture the Fire Show experience.

Inspired by Da Nang, the City of Bridges, 7 Bridges is Vietnam’s first craft house brewery. Located along the Han River, 7 Bridges provides a perfect spot to watch the fire show along with fabulous views of the city.

Located on Bach Dang Street in the heart of Da Nang city, Sky 36 is the highest sky bar in Vietnam. Due to its incredible height, Sky 36 has panoramic views over Da Nang City.  Thus ensuring great views to watch the Fire Show.

Alternatively, the Han River waterfront is a great location for watching the fire show. Not only is it a prime spot to observe the beauty of the Han River and the Dragon Bridge, but it also avoids the busy crowds located on the bridge. Sitting by the waterfront is an ideal spot to relax and watch the show.

Hidden Hint: Watch the Fire Show on the river itself, there are multiple boat tours available

How to Get to the Dragon Bridge Da Nang

Arriving in Da Nang’s city centre, it is pretty impossible to miss the majestic, fire-breathing Dragon Bridge. Not only does it capture attention due to its magnificent design and soaring height. But at night it also has an impressive light display that reflects off the Han River.

If you are located in Da Nang’s city centre, head to Tran Phu Street.  Then at the end of the street, you can’t miss the bridge on the left-hand side. However please note – this is a one-way road.

Things to Do Around the Dragon Bridge in Da Nang

Son Tra Night Market opened in 2018 and attracts a large number of locals and tourists. It is located along Ly Dam Ne street in Da Nang’s Son Tra district. The market contains over 150 stalls.  All of which sell an assortment of unique items such as souvenirs, hand-crafted jewellery, clothes, shoes and so much more! It also offers unique entertainment and is a prime-location to try the local dishes of Da Nang. Due to its close proximity to the Dragon Bridge, it is an ideal location to combine with the attraction.

Bạch Đang Street is considered the most beautiful street in Da Nang, boasting spectacular views of the city. Therefore its location on the left-hand side of the Han River, makes it ideal for viewing Da Nang’s impressive urban landscape and the unique fire show.  Bạch Đang turns into a walking street from 7.p.m every night, with the appearance of many attractions. In the evening, the magnitude of city lights reflect off the Han River, amplifying its beauty. Due to the street containing an array of bars and restaurants, it is a great place to visit and experience either side of the Dragon Bridge Fire Show. This street is the perfect location to observe the vibrant city of Da Nang.

The Dragon Bridge is no doubt a must-see attraction in Da Nang.  Frequent crowds visit the bridge to witness the incredible fire show every weekend. There are an eclectic range of options when it comes to viewing the Dragon Bridge from sky bars to street side. But no matter how you choose to watch the show, we highly recommend getting there in good time. Due to crowds gathering as early as an hour before! The Dragon Bridge is one of the many great features of Vietnam’s ‘City of Bridges’.  Find out more in Hidden’s Da Nang’s Bridges article. 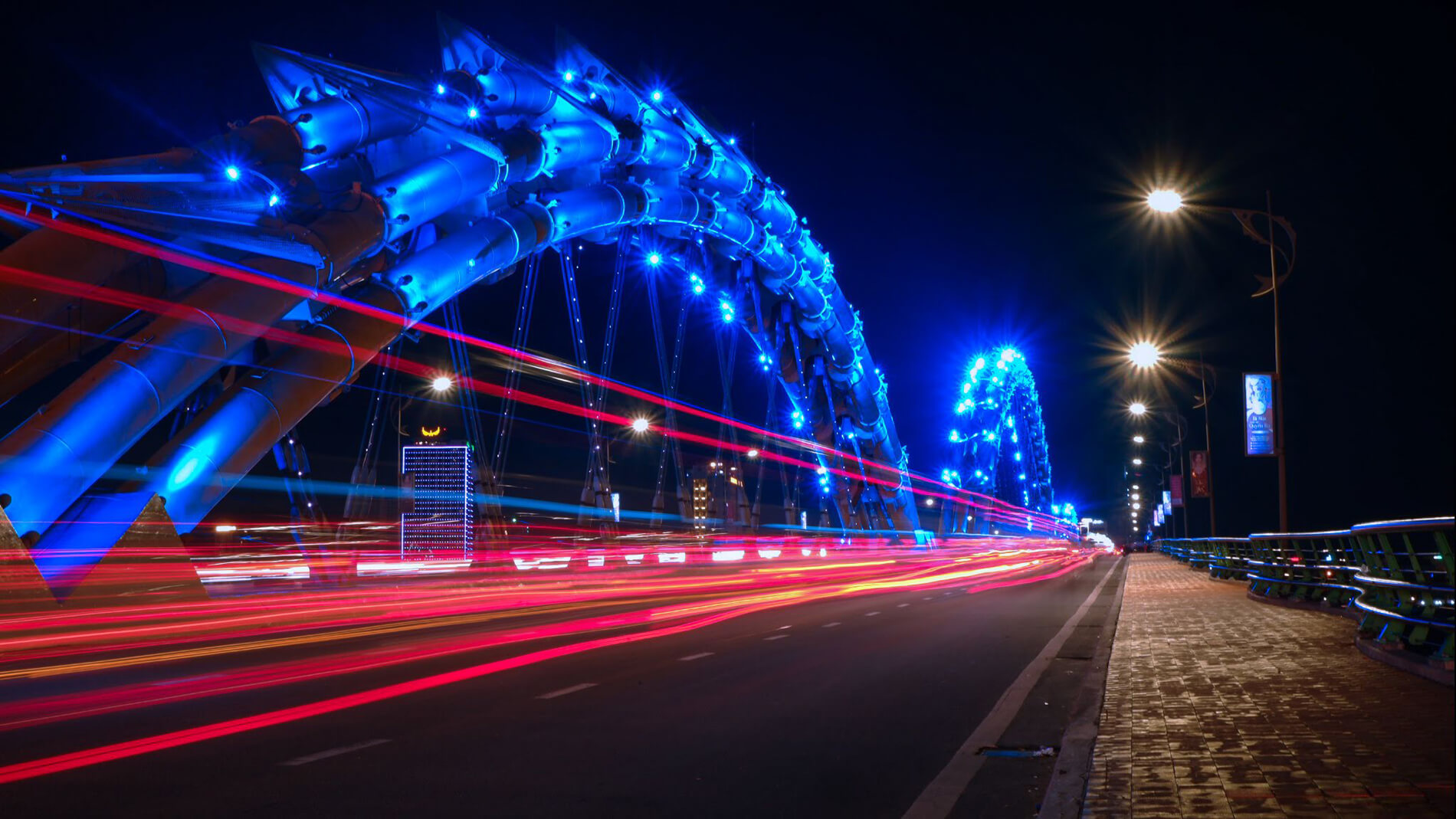 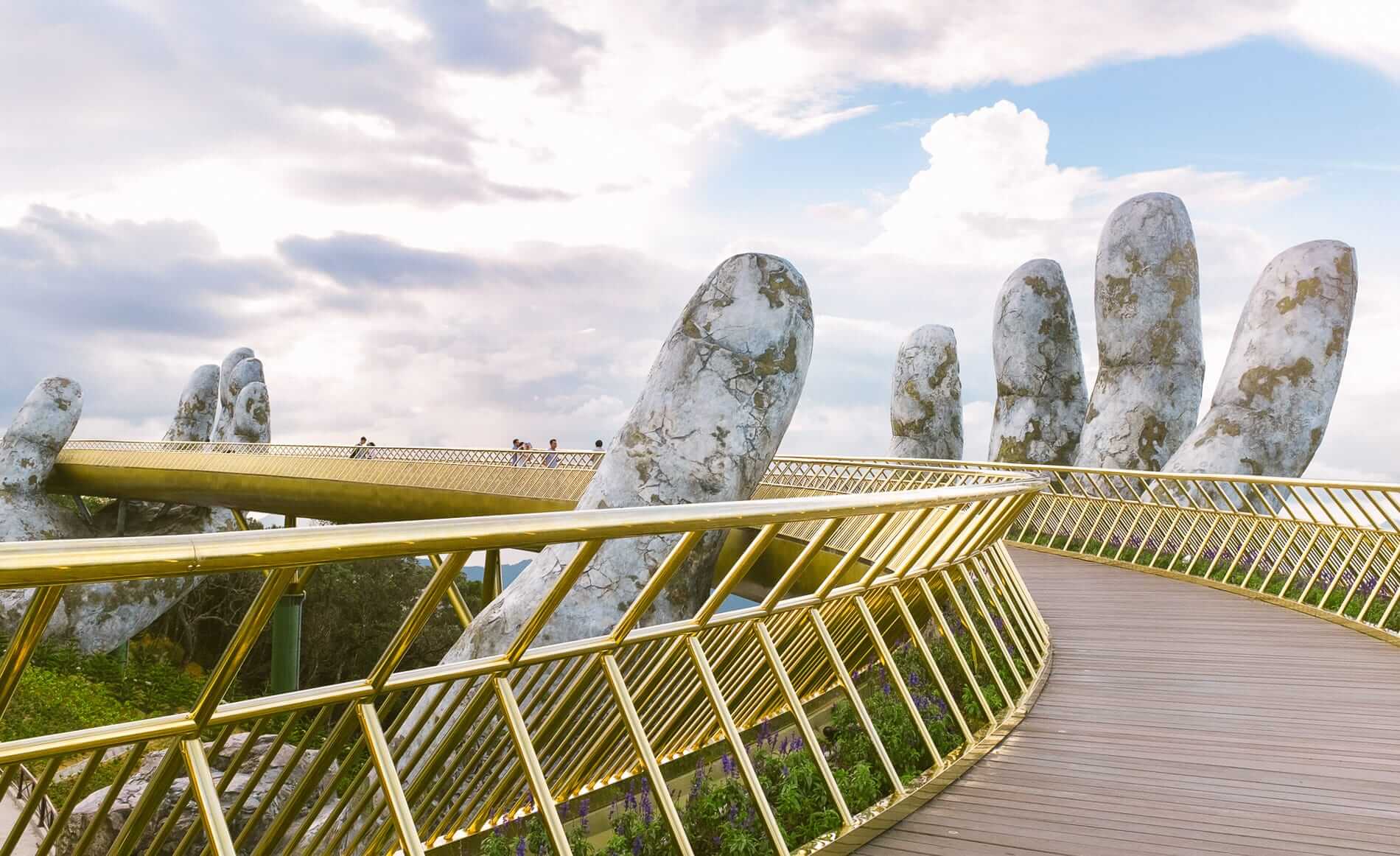 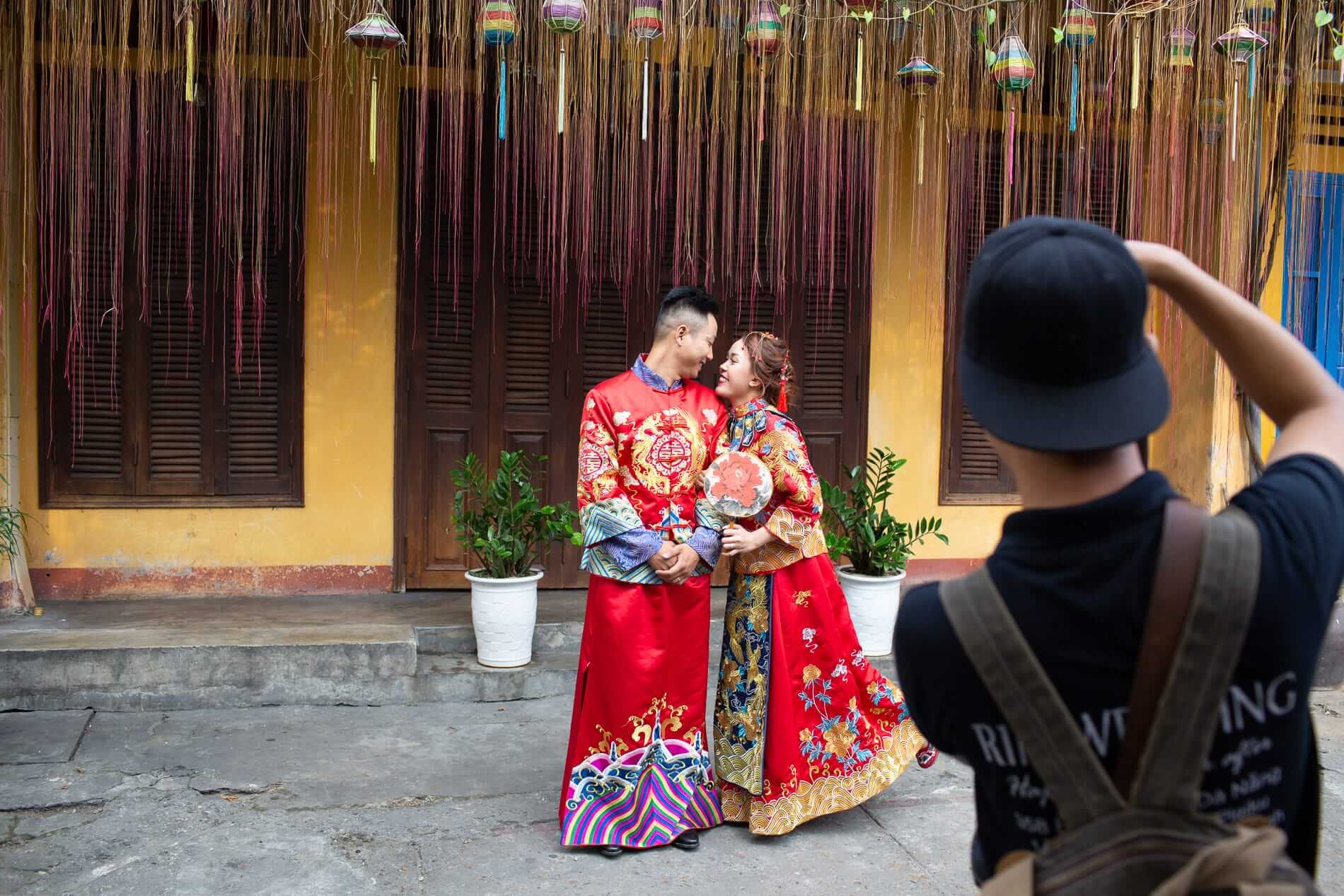