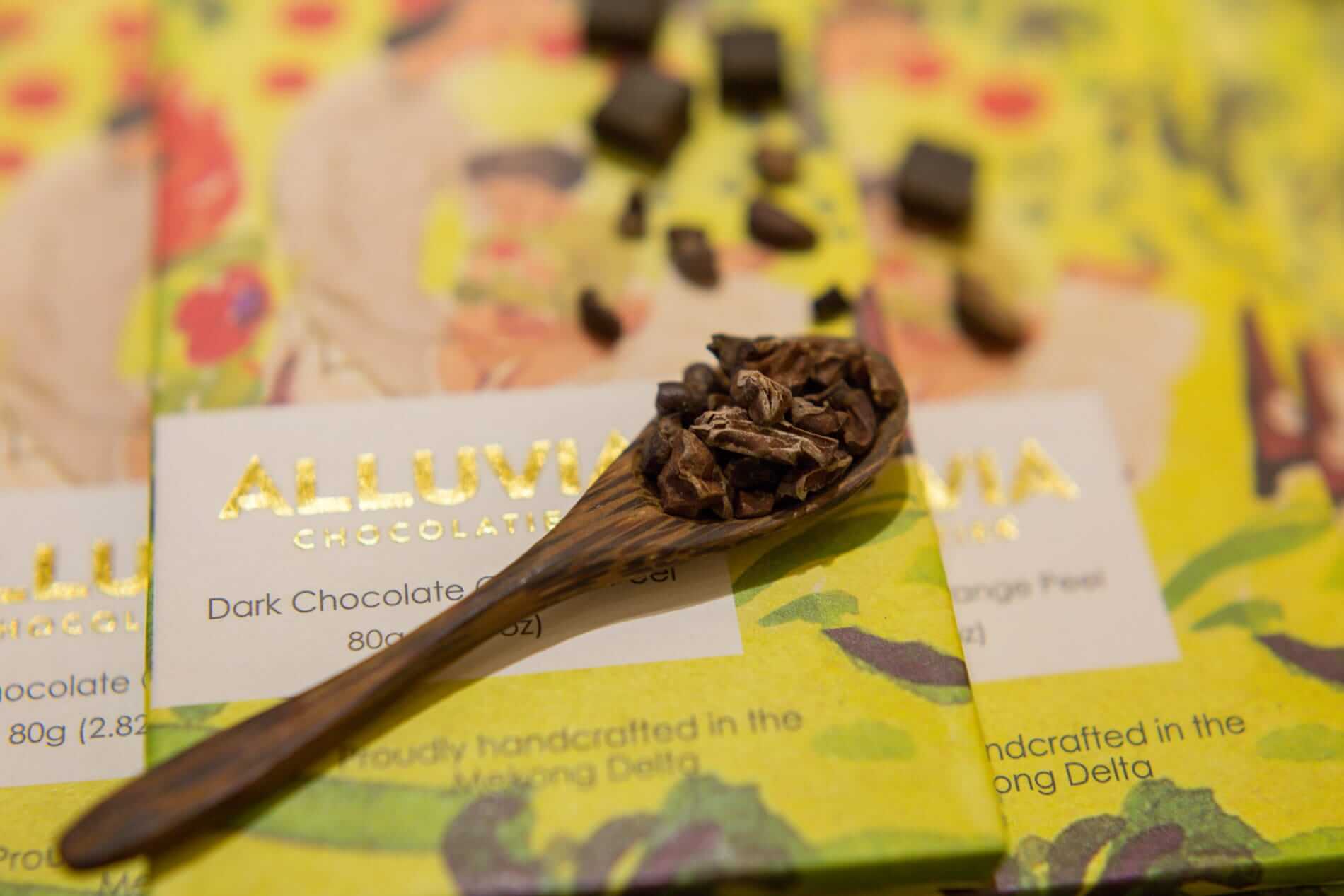 Like craft beer, craft chocolate is coming into its own. (Hmm… beer and chocolate pairings, anyone?) The artisanal concept of bean to bar chocolate has steadily been growing in popularity around the world, including Vietnam.

Chocolate was introduced to the country over 100 years ago by the French, who encouraged local farmers to grow cacao beans. There are now a few companies that create bean to bar chocolate concoctions made from locally grown beans. But Alluvia Chocolate is one of the first that’s fully Vietnamese owned. Started by a father and daughter duo- Xuan Ron and Diep Nguyen- in 2013, it has since expanded across the country, and recently gave Hoi An its second chocolate shop. Read on to hear Alluvia Chocolate’s story.

Hidden Hoi An promo code – Alluvia has an exclusive offer for Hidden readers. Present this code ‘Hidden Mekong’ and receive a special gift upon purchase at the store in Hoi An. The promotion code is valid for 1 month from 11th June to 11th July.

Alluvia Chocolate – What’s Behind the Name?

The concept behind the name was simple. Inspired by the vast amounts of alluvium in the Mekong Delta soil where the company’s beans are grown, Alluvia was born. Alluvium is a material consisting of silt, sand, clay and gravel, rich in organic matter. Deposited by flowing water in valleys and deltas, it creates fertile soil. According to Alluvia, this mineral rich earth produces beans with a high butter content and a uniquely fruity flavour.

One thousand hectares of cacao trees are grown in the Cho Gao district of the Tien Giang province, 100km from Ho Chi Minh City. The trees are planted and maintained by local farmers in accordance with international procedures and certified by UTZ, an international sustainability body that accredits socially and environmentally responsible producers.

Born in Cho Gao, Xuan Ron is very much a child of the soil. A former primary school principal and Vietnam army veteran, he was always open-minded and up for new challenges. This work ethic led him to convert the family land by planting cacao trees in 2005, where the plantation is currently located.

Xuan Ron and his wife planted cacao trees in the garden, joining a cocoa sustainable development project sponsored by the provincial government and ACDI/VOCA, a Washington based economic development organisation that fosters broad-based economic growth, and raises living standards.

Xuan Ron was trained to be ‘cocoa teacher’, imparting his knowledge to other farmers, teaching them how to plant and take care of cacao trees, and how to harvest and ferment cacao beans.

The farm was profitable, selling its cacao beans to major chocolate manufacturers and cacao bean trading companies like Cargill and Olam. But over time, the Nguyen family wanted more. They knew that the cacao beans produced by them and other farmers in Cho Gao were of incredible quality, and had a unique flavour. Wanting to put Cho Gao on the chocolate map, they decided that instead of selling the beans as raw material, they’d use it to produce their own chocolate, branding it as proudly Mekong. In addition to using beans from their own farm, they also wanted to support ethical, sustainable development amongst farmers in the region, and committed themselves to buying beans from farmers at a fair price, while continuing to provide training.

Remember Xuan Ron being up for anything? Well his hard work ethic and willingness to learn are traits shared by his family, and it’s paid off. Xuan Ron already had the specialist knowledge of cacao tree planting and maintenance and had perfected bean fermentation and drying techniques.  So Ms Diep and her husband Mr Yen then taught themselves how to make chocolate. It was only a matter of months before they knew how to define a good finished product, operate the machines, maintain the cacao beans, manage food hygiene, package and design, distribute and so much more.

Today Mr Yen continues to manage the main stages in the chocolate making process – from roasting to moulding the chocolate.  Ms Diep has expanded her skill set turning to promotion and marketing.

Alluvia Chocolate in Hoi An

In 2018, Hoi An was chosen as a retail space for Alluvia due to its prime location in the centre of the country, and because it’s one of Vietnam’s prime tourist destinations.

With its yellow walled interior, dark panelled wood shelving and seating, Alluvia’s store in Hoi An is an inviting space. After a day of walking around town, a stop here is a genius way to replenish energy reserves. Nibble on taste samples in dark and milk chocolate in chilli,  cashew, ginger, pepper and other combinations. There are flavours to suit every taste, and there’s possibly more to come, as Alluvia is always thinking up flavours and products to suit their customers. Find Hoi An’s Alluvia Chocolate store at 117 Phan Chu Trinh Street

Hidden Hint:  When tasting many different kinds of chocolate during one sitting, always taste from the lowest percentage of cocoa to the highest.

Alluvia not only supports its own farmers, it promotes Vietnamese agriculture by buying produce from the provinces they’re best grown in. Its pepper comes from from Phu Quoc, the peanuts from Ha Tinh, cashews from Binh Phuoc, coffee from Central Highlands and coconut from Ben Tre.

Koreans and Japanese form a big part of the customer base, alongside other tourists. Although local Vietnamese are also part of the target market, the price appeals to only those who care more about the products’ origin, quality and can afford to pay 90.000-120.000VND (4 USD-5 USD) per bar.

Hidden Hoi An promo code – Alluvia has an exclusive offer for Hidden readers. Present this code ‘Hidden Mekong’ and receive a special gift upon purchase at the store in Hoi An. The promotion code is valid for 1 month from 11th June to 11th July.

The alchemy of chocolate making is a delicate process. Once the beans are harvested, they’re fermented, dried, roasted, Xuan Ron oversees the plantation and is the brain behind the transformation of cacao beans into original ready-to-eat creations.

The beans are then ground, tempered and finally moulded into bars, in the traditional way of the bean-to-bar process. The entire process takes about 2 weeks.

– Opening the pods and letting them ferment: 6 days

– Drying the beans in sunlight: 5 days

The factory produces 1000 bars per day.

When the chocolate making is done, Diep takes over. She’s the marketing brainchild in charge of promotion and export, with experience promoting and exporting products to Japan and Hong Kong.

Initially, Alluvia established itself by gaining distribution rights across a multitude of retail stores in Vietnam. But working with agents who had multiple brands to promote was a tad frustrating. They do not know the Alluvia story as clearly as its owners, and can not share the vision with customers because of time and human resource constraints.

So Alluvia entered the retail space, in Phu Quoc, Thoi Son and Hoi An. This was seen as an expansion to further promote their brand, as they still maintain sales in agents stores – which provide easier accessibility to customers.

Alluvia now has plans to expand to neighbouring areas such as Da Nang, Nha Trang and Ho Chi Minh City.

Travellers are understandably concerned about buying chocolate bars as a gift to take back home. Nobody wants to walk around in the heat worrying about rushing back before the chocolate melts into a gooey mess. But Yen says they needn’t worry as Alluvia can deliver to their hotels. Also, the chocolate is packed in heat resistant bags, allowing at least an hour before it needs to be at room temperature.

Hidden Hint: If your chocolate becomes soft after long travel, leave it at room temperature to help bring back its normal shape. Then keep it in a cool, dry place, away from direct sunlight. The ideal temperature to store chocolate is around 16-20oC.

Putting chocolate in the fridge will help keep it longer, but usually the temperature is below 10ºC, which can cause the cacao butter to surface. Resulting in a white surface layer that may affect its visual appeal and taste.

A temperature of under 26°C will allow the cocoa butter to remain stable, so as long as you’re in a cool room or car, the chocolate won’t melt.

When travelling, thinking about what to buy as gifts can be even more stressful than the trip itself. So unless you know exactly what friends, family or perhaps co-workers would like, we suggest buying a bar or few of Alluvia’s chocolate. Chocolate makes almost everyone happy, and is universally considered a delicious treat. And it’s a great way to share the taste of Vietnam with everyone back home.

As healthy eating becomes more mainstream, a dark chocolate bar is the perfect after dinner nibble. The staff at Alluvia’s stores will tell you all about the health benefits. But if you know someone has a sweeter tooth, then the milk chocolate range is just as good an option. 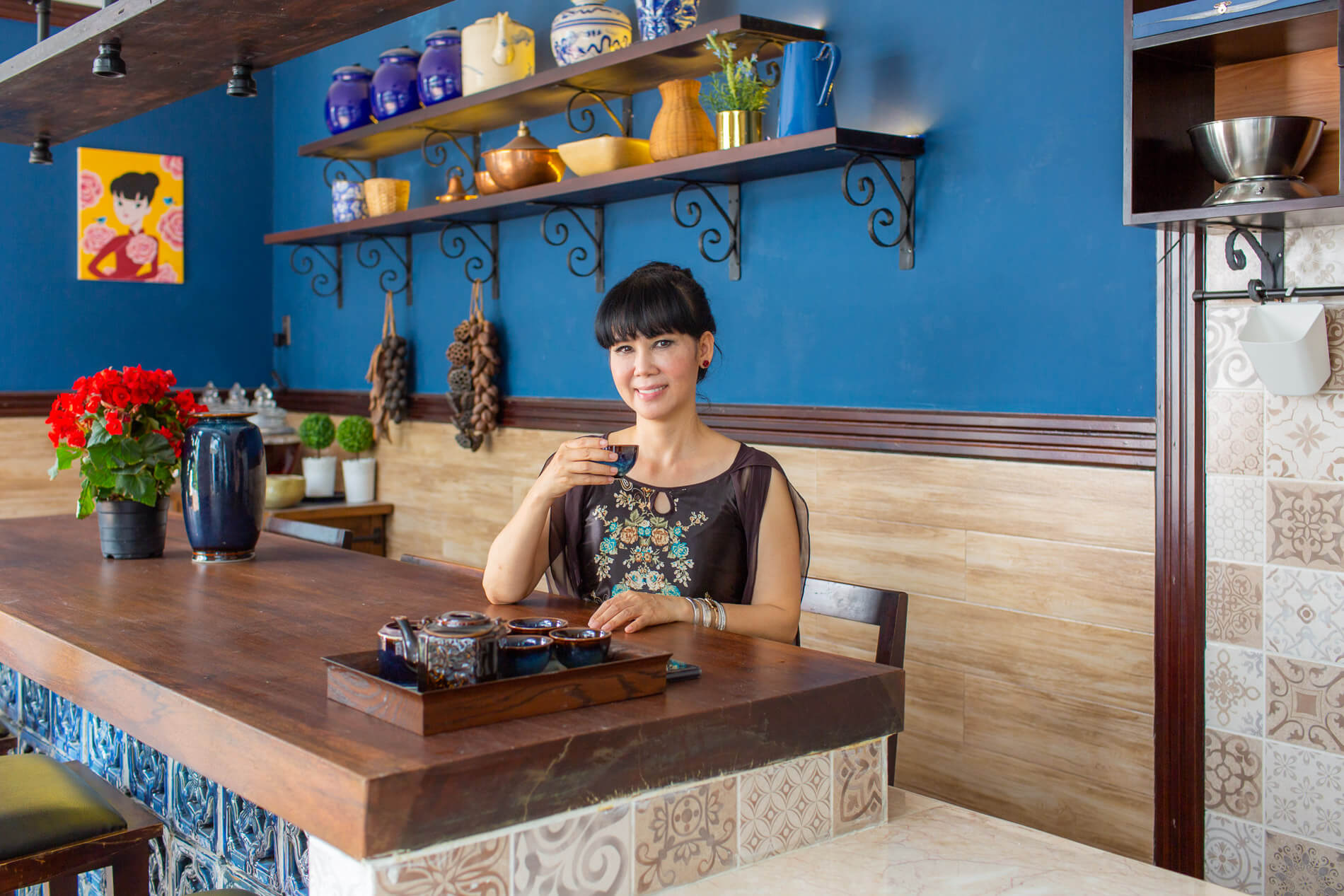 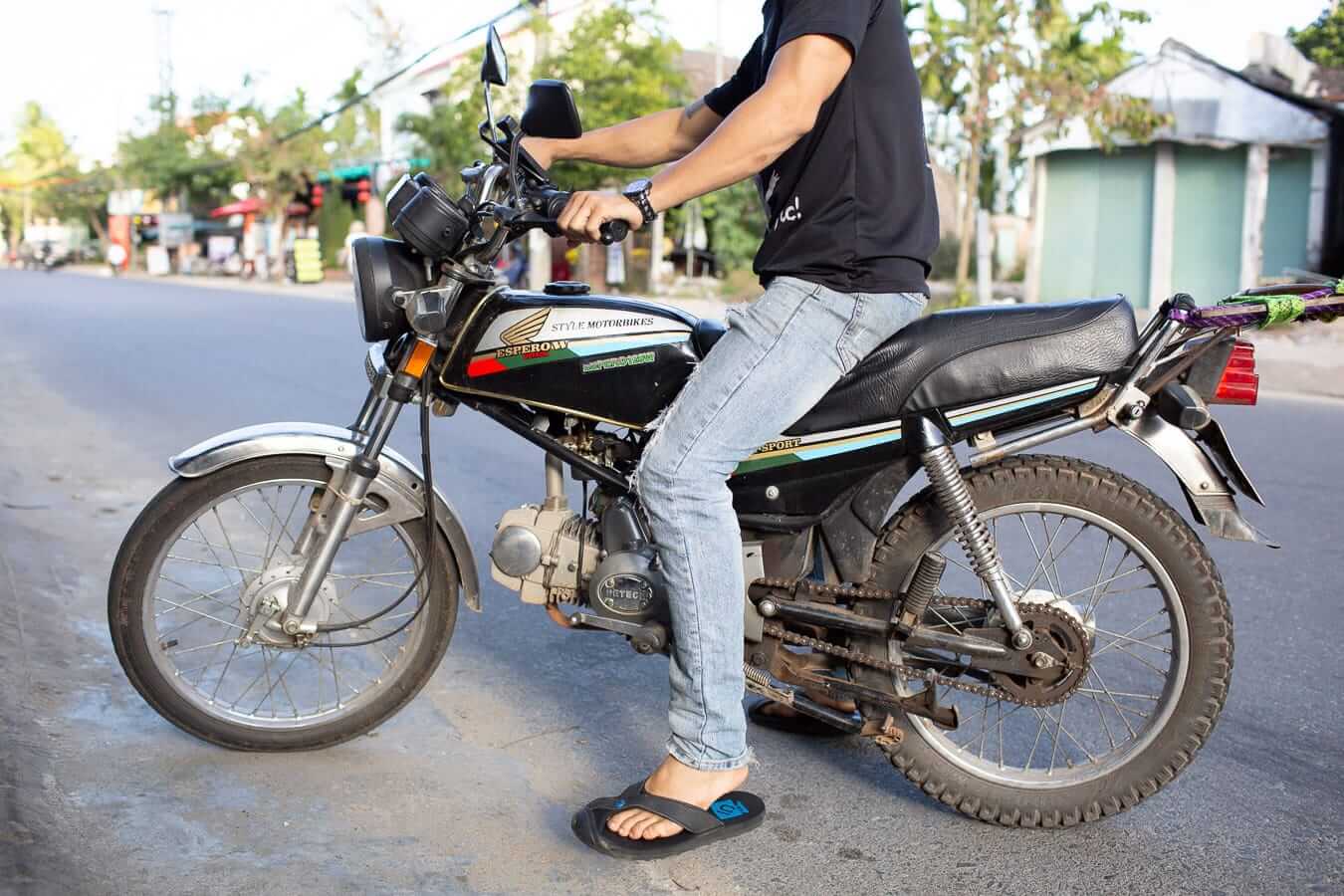 Motorbike Rental Shops in Hoi An 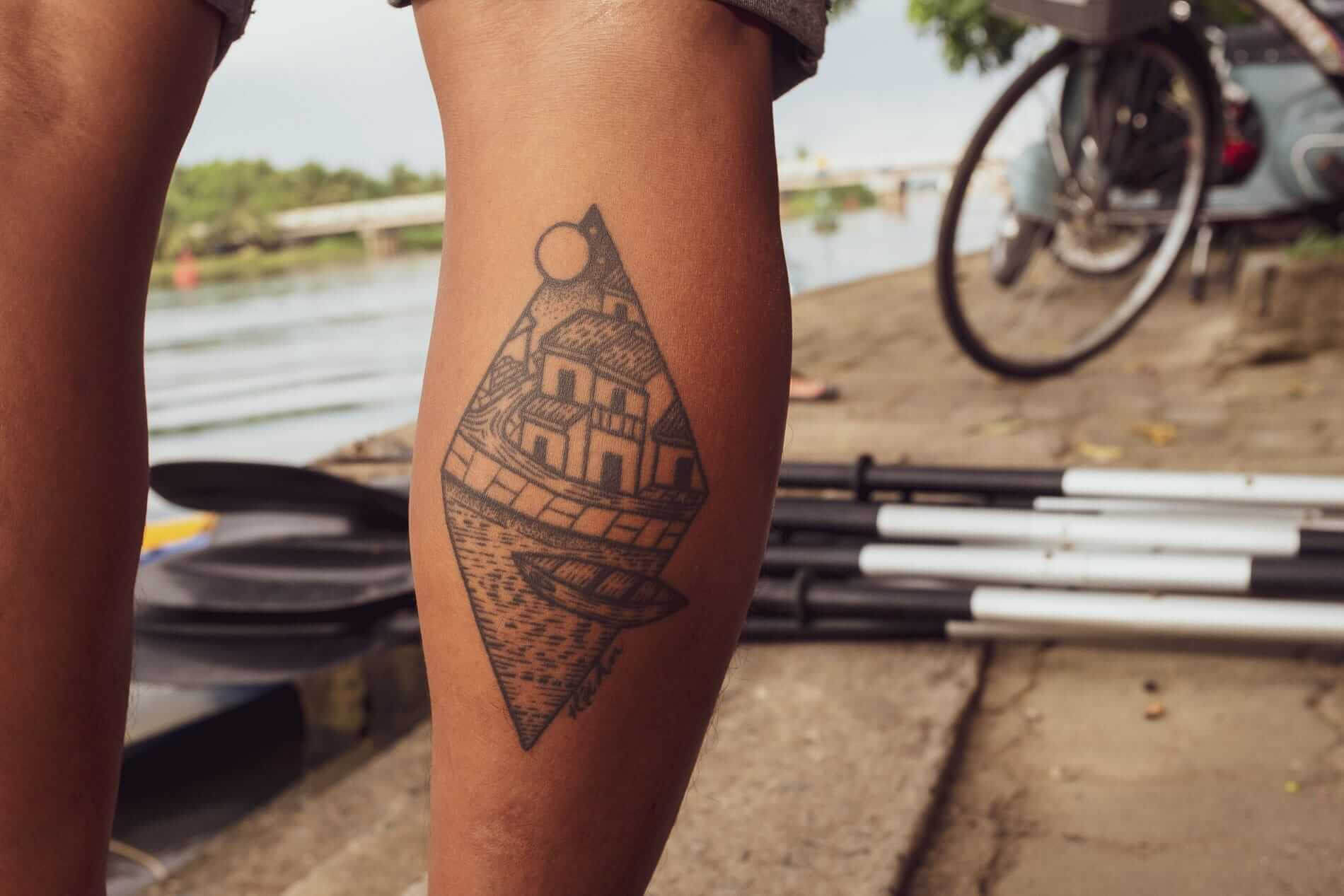 Tattoo and Piercing in Hoi An