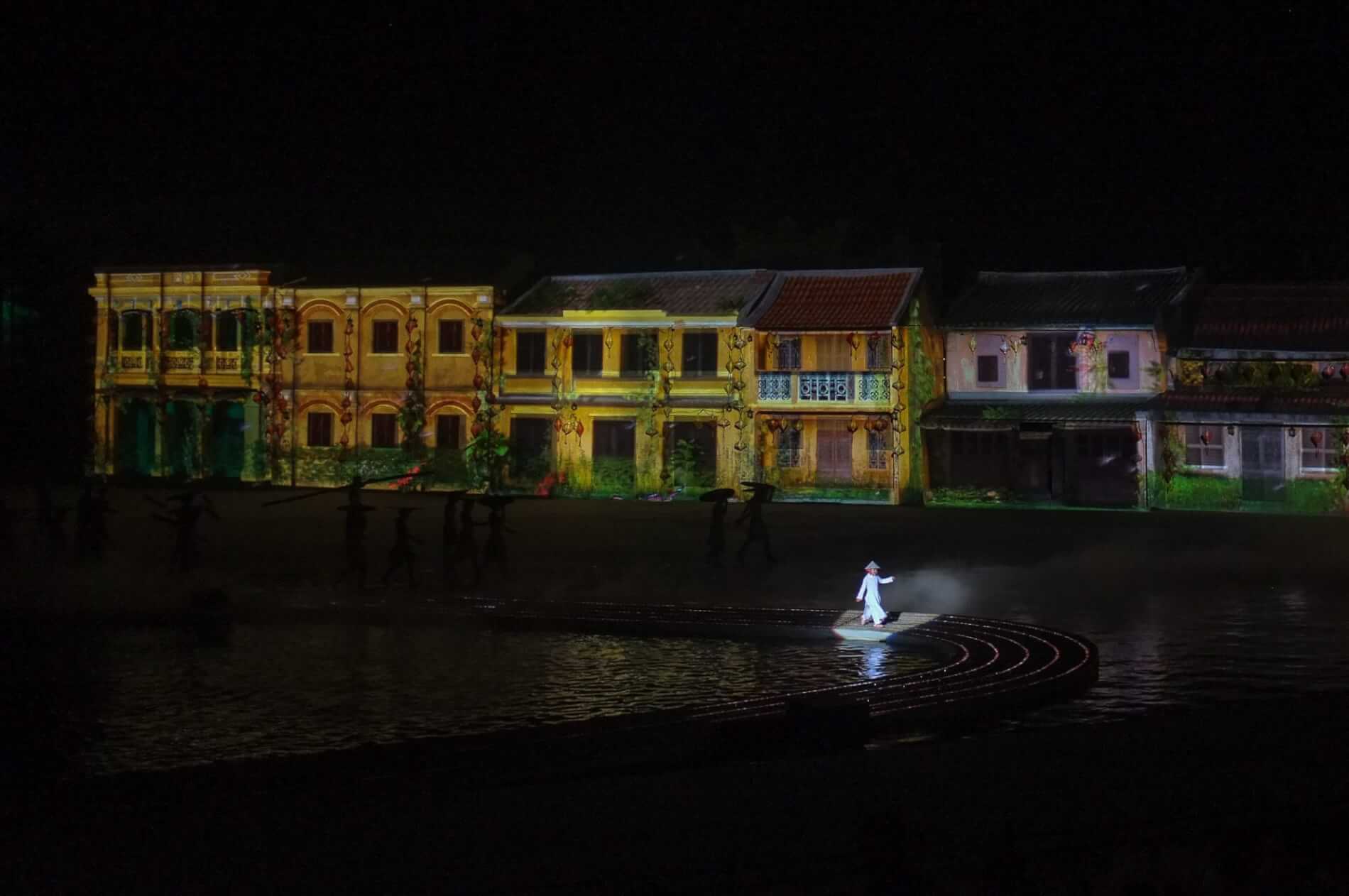 The Hoi An Memories show is an incredible spectacle. The sheer scale of it is comparable to an Olympic Games opening ceremony. Spread over 25,000 square metres, the stage itself is more like a Hollywood set. Boasting a cast of 500 actors and dancers using beautiful imagery, so as a viewer, you are invited along a 400-hundred-year journey of the town’s growth.

You travel back in time to when Hoi An is a trading port during the 16th and 17th Centuries. You become a witness to the ups and downs of Hoi An over the course of hundreds of years while it serves as a cultural intersection on the legendary silk road connecting Vietnam to the rest of the world.

The Hoi An Memories show runs every night from 7.30 to 8.45 p.m. except for Tuesdays when the Hoi An Impression Park is closed.

Hidden Hint: Given the later start time of this show it pays to eat an early dinner. Don’t get caught out searching for a meal after the show. Options are limited as most of the Old Town closes at 10 pm.

The Hoi An Memories show has tiered pricing based on seating zones. The Eco Section is to the front and to the sides of the stage. The Hi Section is a little higher up and situated middle to the stage while the VIP Section is perched up high to give the ultimate view of the stage. Eco and Hi Sections are stadium seating. The VIP Section is, as expected, a little more lush and you get cushioned seating with complementaries such as water, snacks, and a hand fan.

Combo tickets which include entrance to the theme park can be bought for an extra 30,000 VND (1.20 USD). It is listed that the tickets for the theme park alone costs 100,000 VND (4 USD) but at the time we went we were given free entry to the park. Given that the entry is free at this time, it’s best to skip the combo ticket and just get tickets to the show, saving you a few dollars.

You can Pre-purchase your tickets online to receive discounts of up to 10% (not valid for combo tickets). However, tickets are available at the entrance and the show’s 3,000 seats rarely sell out.

This grand cultural performance sweeps you up and takes you on a journey. You see the town grow beginning as a small farmer’s house with his new family, then around them, Hoi An springs from the earth. The show moves through the ages portraying Hoi An’s construction, royal marriage alliances, the introduction of lanterns and trade and foreign influence.

However, the star of the show is the town itself. There are no characters, no plot points, no twists. Also there is no narrator. Instead, the story is held together by a common thread: the tapestry of our lives is woven on the loom of time, each person is a string, and each event the strands, are joined to form a pattern. It is with this image and message Hoi An Memories begins. As the lights rise, the audience sees an actress working an ancient loom; the sounds of her work, the signature slide and clunk of weaving, are a steady beat that marks the passing of time during the show. So in other words, if this show was a ball of yarn it would make a great jumper!

The Hoi An Memories Show Stage

Hoi An Memories is divided into five big stages, with the narrator being a female weaver transporting the audience back to Hoi An’s significant historical moments.

The show itself is on a purpose-built island on the Thu Bon River. Carved from a massive triangle at the tip of the island and assembled to look like two opposing river banks in Hoi An. It is literally full of actors. “Extras” far off in the distance chat, perform chores or otherwise go about daily life in a way that makes it seem as if you were gazing into a window to Hoi An in the 17th century.

The set also has merchant ships, huge moveable structures, and even a giant rolling elephant. Every scene makes use of different props, effects, and choreography to provide a feast for the eyes—appealing to all ages. The entire stage area has strips of light under the set that stretch in eight different directions. Throughout the performance, these lights illuminate to show the passage of time and the changing of the seasons. At the front of the set are two screens with subtitles in Vietnamese and English. Used only a dozen times during the performance, mostly to introduce a new scene. Above all, as the show transcends language barriers, they are non-essential as it is the imagery that does the talking.

How to Get to the Hoi An Memories Show

The Hoi An Impression Theme Park is located in the area of Cam Nam on an island on the Thu Bon River and is very close to the Old Town.

The easiest way to get to the park is to follow Hoang Dieu road straight through the Old Town and across the bridge on to Cam Nam island. After crossing the bridge, take your second left onto Luong Nhu Bich and follow the road until you see large signs for the show and security waving people through. By taxi you should pay roughly 30,000 VND (1.25 USD) from the Old Town.

If you’re riding a bike or walking, after you cross the bridge you can take the scenic route. Take your first immediate left after crossing the bridge and move along the riverbank path. Follow the water until you reach the bridge to Impressions Island. From the Hoi An Cloth Market in the Old Town, it will take you about 15 to 20 minutes to reach the park.

A lesser-known option of getting to and from the theme park is by boat. The boat ride is free and nice way to travel the short distance from the Old Town to the park. Look out for the gas station on Tran Quang Khai – you can’t miss the large Hoi An Memories signs guiding you to the pier. The boat drops you off right in front of the Hoi An Memories show venue which is to the back of the theme park.

Hidden Hint:We highly recommend taking the free boat from Old Town to the Park. It drops you right in front of the show venue and is the quickest way to the park.

Hoi An Memories is the key component of the Impression Theme Park, which celebrates Vietnam’s rich cultural history. The park has themed villages, complete with stunning pagodas and bridges. They play host to well-produced minishows and informative workshops where guests learn all about Hoi An’s history as a vibrant trading port. The theme park is a large interactive show in itself. Easily enjoyed as the as a pre-show warm-up before the main Hoi An Memories show.

The park currently opens at 5 p.m. daily (closed on Tuesdays). To learn more about what the park has to offer for food and entertainment, click here.

Hoi An Memories is a grand spectacle of such phenomenal scope – there are not many shows like this in the West. It really is a once in a lifetime experience, sitting outside taking in this visual extravaganza on a balmy Hoi An evening. It discards many of the things westerners are familiar with from Broadway or the Globe; there are no attempts to make the show true to life and no great character development. Instead, Hoi An Memories invites you to be captivated by a colourful romance tale, the story of you falling in love with Hoi An. 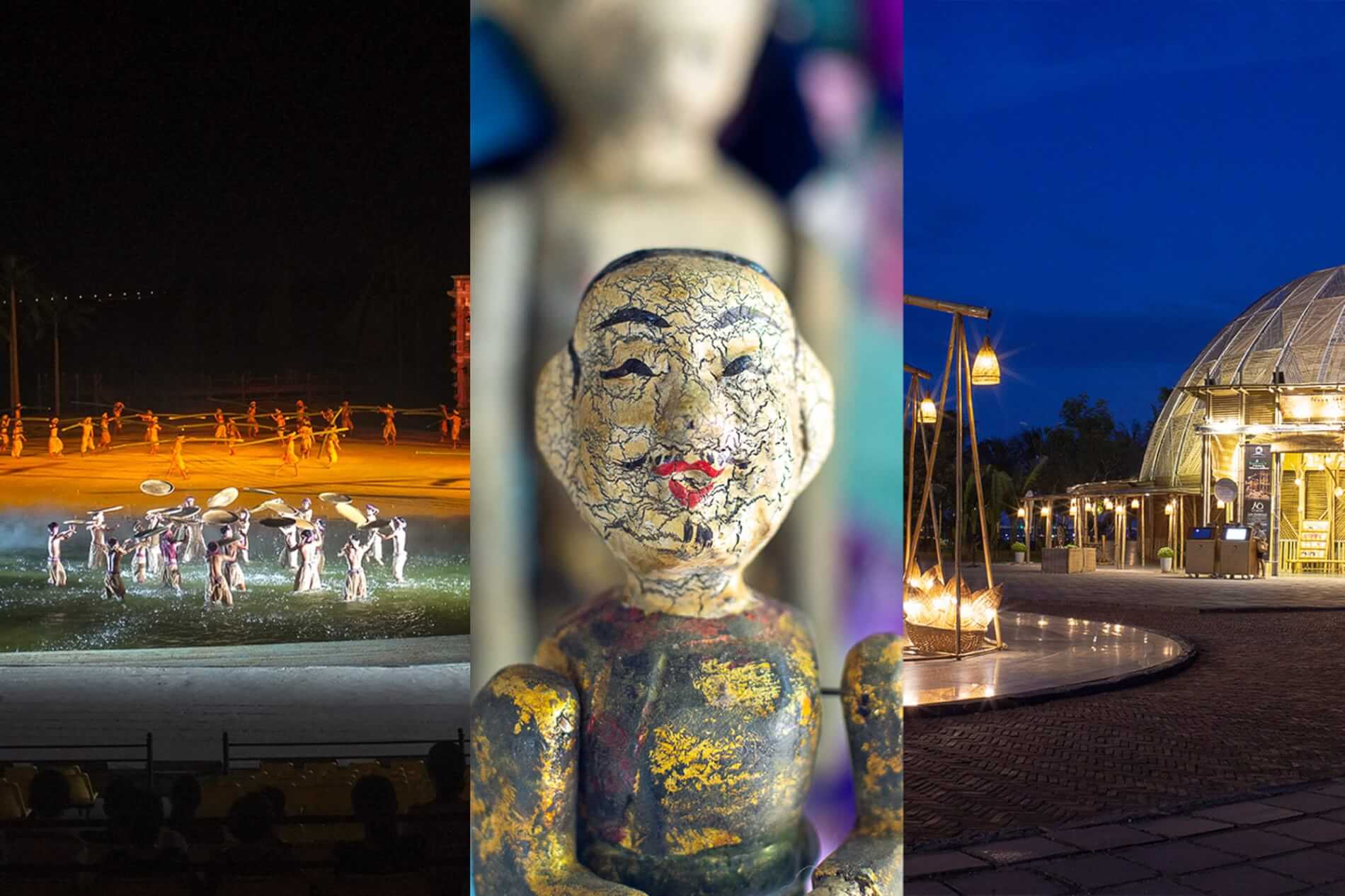