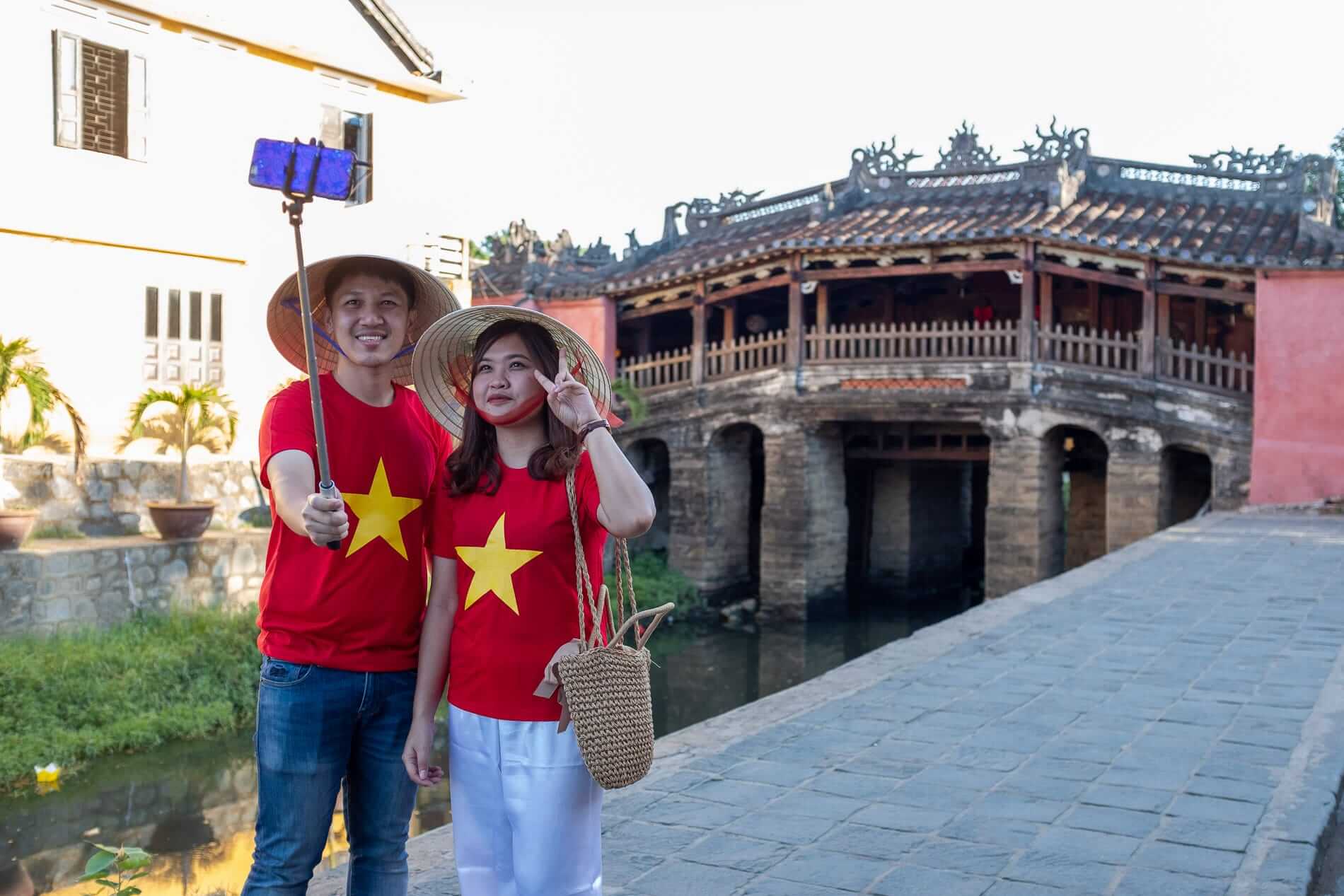 The Japanese Bridge – Emblem of Hoi An

Hoi An is a town full of rich architecture, bright colours, and a number of cultural historical relics. One of the most famous attractions here is Hoi An’s stunning Japanese Covered Bridge. Also known as the Cau Chua Pagoda. It’s a 400 year old bridge, 60 feet in length, painted a beautiful reddy pink colour with a wooden pagoda roof.

This bridge has a fascinating history dating back to its construction in the 15th century. Since then it has undergone numerous restorations. Fortunately, the bridge is well preserved, an iconic symbol of Hoi An, part of any walking tour of the Old Town. In fact, you can find replicas of the Japanese Bridge all over town in the form of souvenirs, paintings and even 3D desserts! The Japanese Bridge, Hoi An’s town symbol and an important national monument, appears as an illustration on the 20,000 VND note. You’ll see many people holding it up while posing beside the bridge itself.

In this guide, Hidden delves into the Japanese Bridge’s past and present, so that you can make an informed visit.

The History of the Japanese Bridge

Hoi An’s most recognisable landmark dates back to the 15th century when Hoi An was one of the biggest trading ports in the region. A place for exchanging spices, goods, styles and ideas.  Therefore merchants came from around the world to trade here, the majority were Chinese, Dutch, Portuguese, and Japanese.

As many of these travelling merchants began to settle in Hoi An, they started building houses, assembly halls, shrines, and pagodas to gather their communities. At this time the Chinese and Japanese were the largest communities, but their communities were largely separated by a river. However as the communities grew in size, the Japanese decided to build a bridge to link their district with the Chinese.

Hidden Hint: To this day the builder of the Japanese bridge still remains anonymous.

The Japanese Bridge was completed in 1593 with its distinct arch and decorated roof. In 1719 Lord Nguyễn Phúc Chu, ruler of Southern Vietnam (Dang Trong) from 1691 to 1725, visited Hoi An. It is said that he personally carved the three Chinese characters over the temple door. These characters translate to ‘The bridge to receive guests from afar’ or Lai Viet Kieu in Vietnamese.

The bridge was constructed of lacquered wood and solidly built to withstand the threat of earthquakes and notoriously poor weather in Hoi An at the time. In fact, one story explains that the bridge was intended to subdue the monster Namazu. Namazu is a Japanese mythical monster, a dragon (or possibly a giant catfish), whose struggles were the cause of earthquakes. The creature is said to have had its head in India, tail in Japan, and it’s back in Vietnam. The Japanese Bridge was said to pin down Namazu’s back, preventing earthquakes and other calamities.

19th and 20th Century –  Preservation of the Bridge

During their colonial reign, the French flattened out the road across the Japanese Bridge so motorbikes could get across. However, these changes were later undone and the bridge became pedestrianised again during major renovation works in 1986. Although there has been a mix of Vietnamese, Japanese and Chinese architecture, the bridge has still stuck to its original distinct character and strong Japanese roots.

Hidden Hint: Since being named a UNESCO World Heritage site in 1999 the Japanese Bridge has seen an increase in visitors, with an average of 4,000 visitors walking across it everyday.

In 2016 the Japanese Bridge required urgent renovation.  River water had eroded parts of the bridge leaving it particularly vulnerable in typhoon season, as the bridge is in a location that is prone to floods in Hoi An’s Old Town

Local authorities plan to close down the Japanese Bridge for repair before the structure completely breaks down in the next flood. Therefore it’s strongly advised that you check it is not undergoing maintenance, especially if it is a key component of your visit to Hoi An.

The Japanese bridge, situated at the west end of the Old Town, looks out on to the busy waterway between the Old Town and An Hoi Islet. It currently connects Tran Phu Street (the Chinese district) to Nguyen Thi Minh Khai street (the Japanese quarter).

The best way to access the bridge is by walking down Tran Phu Street, starting at the Central Market. This street has a number of shops and cafes lined on both sides that you can stop at on the way. Once you get to the end of the street you will arrive at the entrance of the bridge.

Anyone can photograph the outside of the Japanese Bridge, however, you will need a ‘Hoi An Old Town’ ticket to cross it and to access the temple inside. This ticket gives you access to five attractions. So you can pick and choose from a range of ancient houses, museums, assembly halls and old houses around the Old Town. The bridge has a front desk inside, but you can’t buy your ticket here.

Where to Buy Tickets for the Japanese Bridge

11 ticket stalls surround the outskirts of the Old Town’s designated walking area. The closest ticket stall to the Japanese bridge is directly in front of the bridge, at the Tran Phu street and Bach Dang street intersection.

Although a ticket is now compulsory for tourists entering the Old Town, enforcement is inconsistent. So it’s a bit of a lottery. But bear in mind that the small cost of the ticket goes a long way to preserving the Japanese Bridge and the rest of Old Town for future generations.

What to See and Do

A visit to the Japanese Bridge can take less than 20 minutes. That’s if you just want to go and take some photographs, walk across, and visit the temple. We think it’s best to incorporate your visit with other cultural activities or for a break in between some shopping. The Japanese bridge is a tourist hotspot in Hoi An. Head there early morning to avoid the crowds who normally arrive in the afternoons.

If you’ve bought an Old Town TIcket and are a bit stuck on where to start, then download the app tale.city. It’s a free app providing you with an easy to use map and accompanying audio walking tour.  All conveniently starting from your current location. Each stop takes you through the history and story behind the sites.

Firstly, a lovely example of a Japanese bridge, well known for their pure beauty and graceful curves. It has a distinctive tiled covered roof with yin-yang tiles. At the entrance take your time to look at the details including the little porcelain bowls used to cap the ends of the tiles.

The Guardians of the Bridge

At either end of the bridge are a pair of dogs and a pair of monkeys. To many people, they represent the guardians of the bridge. A symbol of sacredness in Japanese culture.

Walking through the entrance you see the dogs. Weathered statues with a shrine in front of them where locals offer blessings. Why dogs and monkeys are here remains a mystery. According to one source, it’s because many of Japan’s emperors were born in the years of the dog and monkey.  However, it is also possible they have a connection to the bridge building, with construction beginning in the year of the dog and completed in the year of the monkey.

Walking across the aisle the temple overlooks the river. Particularly stunning in the evening with the Old Town brightly lit with lanterns and traditional boats floating up and down the river. The bridge itself lit up with its sparkling colourful lanterns.

Hidden Hint: Head to the walker’s bridge (just opposite) for the best photo opportunity of the Japanese Bridge.

The temple is on the north side of the bridge. The temple pays tribute to the Taoist God of weather, Tran Bo Bac De. Sailors, merchants, and locals would come here in an attempt to fend off bad weather and natural disasters. The temple has a very strong aroma of incense as many locals still come here to worship. As it is a place of worship, please be mindful and remain quiet whilst inside.

The walls of the temple decorated with historical images of Hoi An and the Japanese Bridge. These depict the bridge and local people from the 15th-19th century.

Exiting the temple you will see a pair of monkeys, the second guardians of the bridge. You exit on to Nguyễn Thị Minh Khai Street, a good place for shopping for art and souvenirs.

Around the Japanese Bridge

Following your visit to the Japanese Bridge, the surrounding area of Tran Phu Street has a range of bars, cafes, and restaurants to pop in to. One of our favourite coffee spots along this street is Faifo Coffee. From their rooftop, you can check out the amazing aerial view overlooking the Old Town’s ancient rooftops.

If you head to the Japanese Bridge in the evening you’ll see lanterns glowing across the river.  Be sure to go across to An Hoi and check out the lively Hoi An Night Market.

Hidden Hint: Art Space serves a 3D printed dessert of the Japanese Bridge, the first of its kind in Hoi An

There are a number of shops around the Japanese Bridge selling clothing, artwork, and souvenirs. Tran Phu street is a good place for shopping as you can find a range of upmarket and independent stores such as Metiseko, Sunday, and Gingko. As you head to the other side of the bridge to Nguyễn Thị Minh Khai Street there are a number of shops selling artwork and affordable souvenirs.

If you are on the hunt for souvenirs of the Japanese Bridge, head to Ha Ha Art in Everything,  situated right by the entrance to the bridge. Here you’ll find all sorts of goodies from large prints to smaller souvenirs such as magnets, coasters and notebooks.

Above all, the Japanese Bridge is an iconic piece of Hoi An’s architecture. After 400 years the bridge still remains as aesthetically pleasing as it was when it first opened. It is a beautiful reminder of a gathering place for merchants who dreamed of a community living in harmony.

During the day you will be able to capture the beauty of the bridge, and in the evening you can take in the nightscape surrounding the Japanese Bridge.

As renovations to the Japanese Bridge are imminent, we recommend you don’t miss your chance to see it, in all its beauty, while you can.

Tailoring in Hoi An – We Find The Best 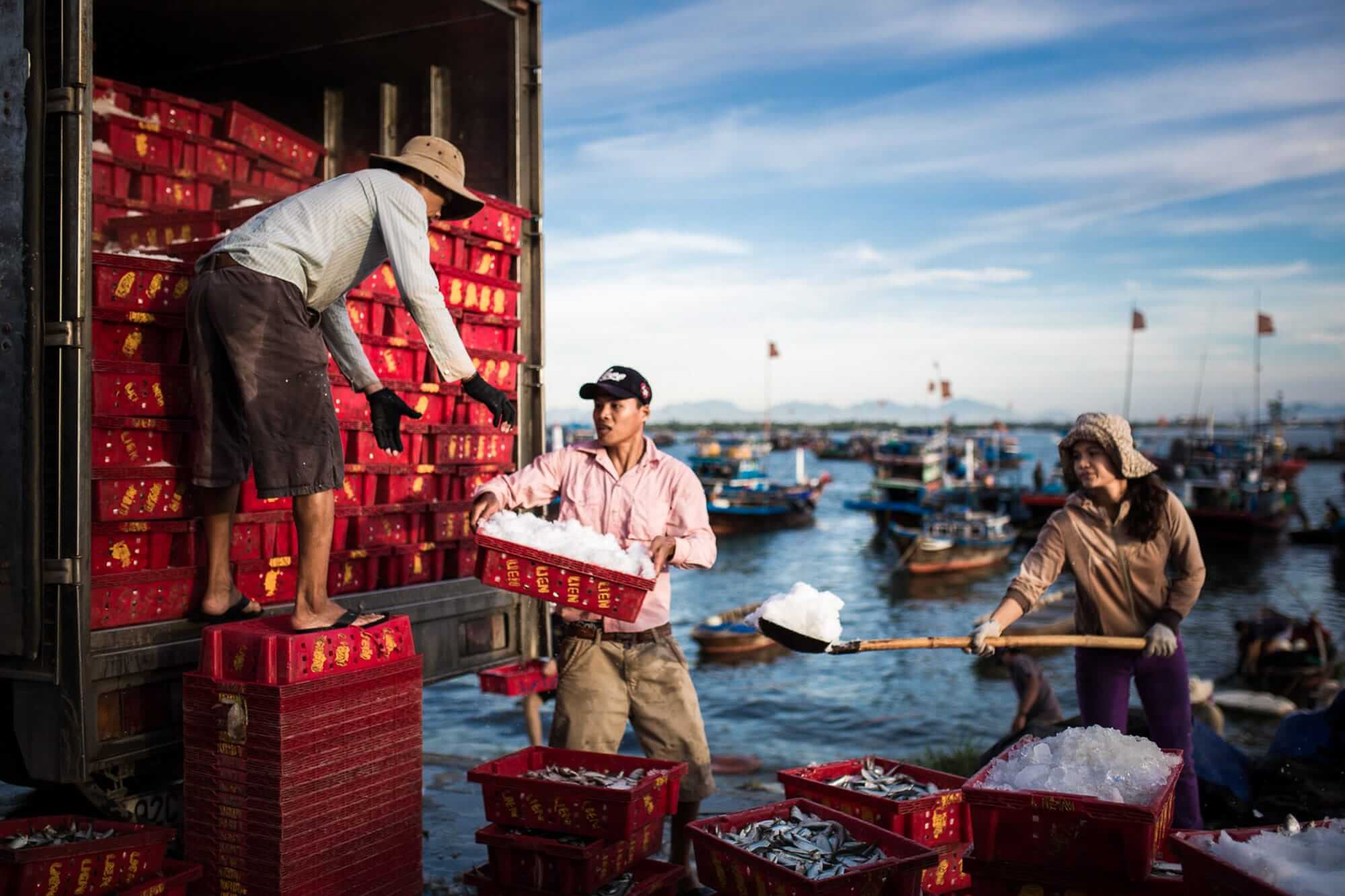 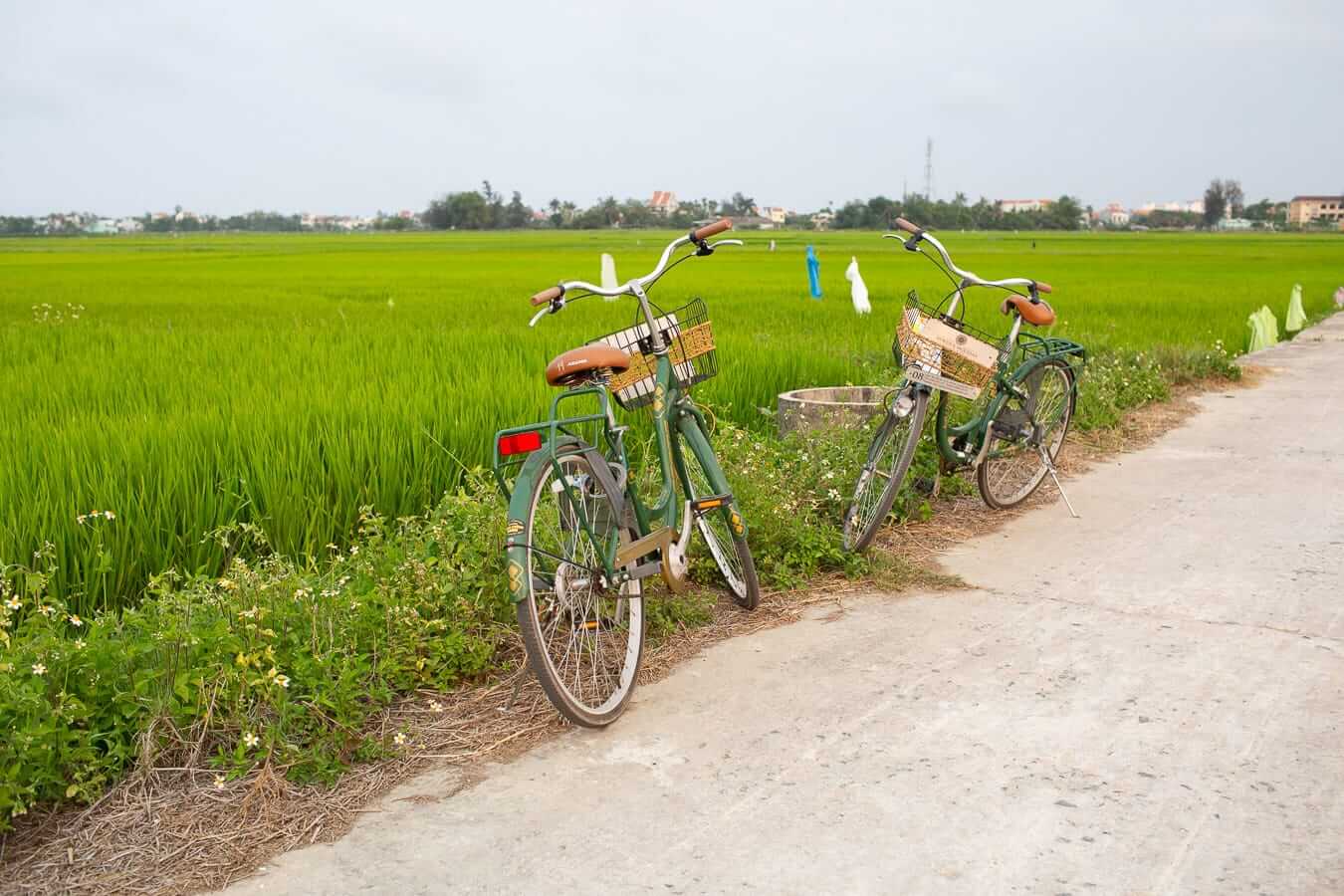 The Best Bicycle Tours in Hoi An