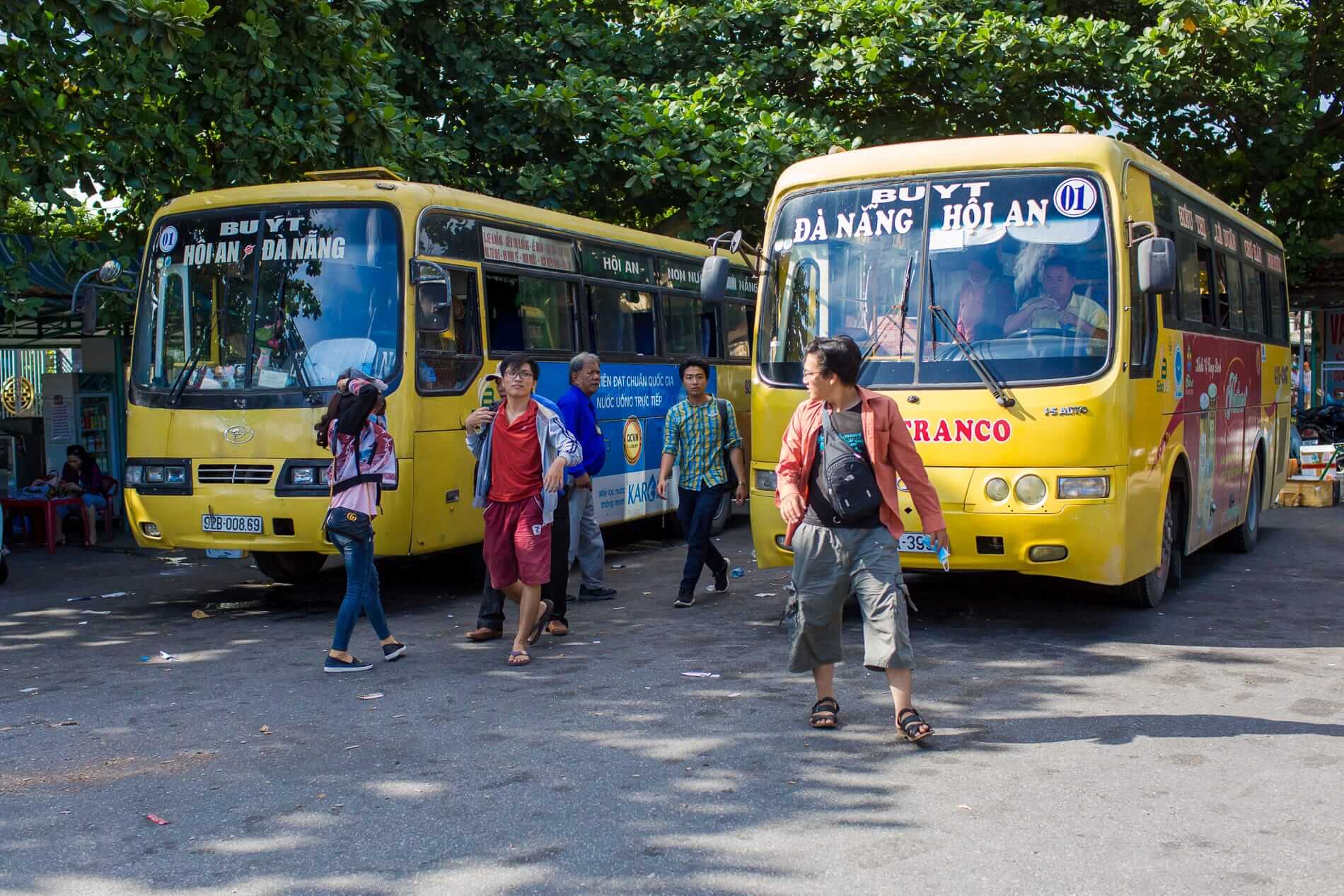 Transportation Guide: How to Get From Da Nang to Hoi An on Bus 1

Da Nang and Hoi An are so close together yet so different in their individual appeal that many travellers choose to experience both! There are many transportation options to travel the 30 km from Da Nang to Hoi An, but the cheapest one is definitely Bus 1 Da Nang to Hoi An.

Bus 1 from Da Nang to Hoi An is a local bus also known as the Yellow Bus. The bus caters mostly to local commuters but also gets its fair share of budget-conscious travellers. Tourists can also use it to get to the Marble Mountains, located between Da Nang and Hoi An. There are many other options available to tourists travelling from Da Nang to Hoi An, ranging from tourist buses to private cars but understandably, the prices will be higher than Bus 1.

Commuting from (or to) Da Nang International Airport

Maybe you are flying into Da Nang and want to go straight to Hoi An. Or perhaps you are staying in Hoi An and flying out of Da Nang International Airport to your next destination. Either way Hidden has you covered taking Bus 1 Da Nang to Hoi An.

Bus #1 from Da Nang Airport to Hoi An

Arriving at Da Nang International Airport but eager to get to Hoi An? Then take Bus 1. However, Da Nang’s Central Bus Station is too far to walk to from the airport. Take a Grab bike or FastGo car (Vietnam’s Uber equivalent), depending on how much and what type of luggage you have, to the Da Nang Central Bus Station. From here, catch the number 1 bus to Hoi An.

Bus #1 from Hoi An to Da Nang Airport

If you are going to Da Nang Airport from Hoi An, then get off at 411 Dien Bien in Da Nang (see map). This is the closest bus stop to the airport. While it is closer than the Da Nang Central Bus Station (four km from the airport), this stop is still 3.5 km away from the airport. Therefore Hidden recommends taking a Grab bike/FastGo car regardless of where you get off in Da Nang.

Commuting from (or to) Da Nang Railway Station

If you are taking the Number 1 bus between Hoi An and the Da Nang Railway Station is a lot more convenient than taking it from or to Da Nang Airport.

Bus #1 from Da Nang Railway Station to Hoi An

When you exit Da Nang Railway Station, follow “Hai Phong Rd” until you reach “Ong Ich Khiem Rd”. Then turn left, and the bus stop for the Number 1 to Hoi An is located 10 minutes away at 162 Ong Ich Khiem.

Bus #1 from Hoi An to Da Nang Railway Station

If you are heading to Da Nang Train Station from Hoi An, get off at the 162 Ong Ich Khiem bus stop in Da Nang. From there, it’s a 10-minute walk to  Da Nang Railway Station. Or, if you have heavy bags, take a very short and cheap taxi to simplify your commute.

Some indignant tourists point to the fare chart displayed inside the bus. Sometimes this tactic works and unfortunately, sometimes it doesn’t. If there are other tourists on the bus who have already overpaid for their fare, it is unlikely that the bus driver will let you off the hook.

According to some sources, luggage on Bus 1 from Da Nang to Hoi An is charged at 10,000 VND (0.45 USD) a piece. This isn’t clearly indicated on the buses. According to other sources, it’s another tactic to overcharge tourists.

Hidden Hint: If you don’t have exact fare money (18,000 VND), break it before you get on the bus because you may not get change back from a big bill! If there is any confusion with bus personnel, point to the fare chart.

There are still times when tourists are made to pay an unofficial “tourist tax” for Bus 1 Da Nang to Hoi An. However, the difference tourists pay is nominal.   The bus route is already much cheaper compared with your alternative transportation options.  It’s 250,000 VND (10.85 USD) for a private transfer! So try not to let paying an extra 20,000 VND (0.85 USD) ruin your trip. Of course, it’s up to you whether the extra amount is worth arguing over.

Bus 1 Da Nang to Hoi An runs every 20 minutes from 5:30 a.m. to 5:50 p.m. regardless of which direction you are commuting to. The trip takes roughly an hour in either direction.

For the exact departure time for when the next bus leaves check GoogleMaps. Select the bus under the public transportation option in Google navigation. Then use the exact names of the bus stations in Hoi An (Ben Xe Hoi An Nguyen Tat Thanh) and Da Nang (Ben Xe Da Nang). If you just put Hoi An and Da Nang in Google navigation and select the public transportation option, the Bus 1 Da Nang to Hoi An schedule will not come up!

Below is the Da Nang/Hoi An bus route. It contains all the stops along the way and can also be found on Da Nang’s official public transportation website.

If you are continuing to Hoi An, you are dropped off at the Ben Xe Hoi An Bus Station, which is about a 15 minute walk to the centre of the Old Town.

Hidden Hint: Grab or FastGo ride hailing apps are always cheaper than taxis so make sure you install them on your phone.

For example, some buses keep their doors wide open while in motion while others do not. It is a common characteristic of public buses in Southeast Asia to keep open doors on the bus while the bus is in motion. Perhaps a bit unnerving on your first encounter with this seemingly unsafe set-up.  However this system makes it easier and faster for passengers to board and disembark. This widespread system is perfectly safe but it may be slightly unsettling if it is your first encounter with it.

Taking Bus 1 Da Nang to Hoi An is a glimpse into how regular Vietnamese people live their lives. In addition to the bus driver, the bus has a fare agent who moves around the bus ensuring people pay their fare.

Bus 1 Da Nang to Hoi An does not have a luggage compartment underneath the bus. Your luggage simply goes on the floor inside the bus. So if you are concerned about your luggage getting dirty, take precautions beforehand to protect it.

Hidden Hint: Move any delicate items or valuable items to your hand luggage before boarding. Depending on how many people board the bus, your bags may be moved and rearranged.

Taking the #1 Bus from Hoi An to Da Nang

If you are taking the bus from Hoi An to Da Nang there are a few things to consider. The Ben Xe Hoi An Bus Station is nestled between Le Hong Phong and Nguyen Tuan Streets. When you are getting close, you are likely to see a few locals with roller luggage or perhaps a backpacker with a banana shirt, reassuring you that you are almost there!

The bus station is only about 1.5 km from the Old Town centre, making it less than a 10 minute ride away. Despite the relative proximity, it couldn’t be more different than the Old Town. The bus station is located in a Vietnamese neighbourhood with lots of local coffee shops, supply stores, and food stands. Of all the food stands and restaurants, the most familiar are com ga and banh mi with many other more obscure options. No Engish signs or menus as far as the eye can see!

Hidden Hint: Go to Vinmart (Vietnam’s 7-Eleven) across the street from the bus station on 67 Nguyen Tat Thanh if you want to get water or snacks before your bus ride. The business listing isn’t on Google maps yet, but the bricks and mortar are there.

The Ben Xe Hoi An Bus Station is a completely outdoor bus station. So when you get there, don’t be thrown off by the lack of bus shelter or ticket counter. There is, however, a very basic toilet facility on one side of the lot. Above all – don’t worry about getting on the wrong bus, because the Hoi An bus station serves only the Hoi An Da Nang bus line.

Bus 1 Da Nang to Hoi An is not exactly a glamorous experience. However, Hidden understands the need to budget on occasion.  So that way, you have more money to spend on memorable meals and experiences.

If taking public transportation doesn’t faze a seasoned traveller like you, then Bus 1 Da Nang to Hoi An is an awesome and cheap option! However, if a lack of air conditioning and specialised luggage compartments are a deal breaker, then don’t worry. There are plenty of other ways to get between Da Nang and Hoi An and vice versa. Check out our complete guide here for alternative transportation options between the two cities. 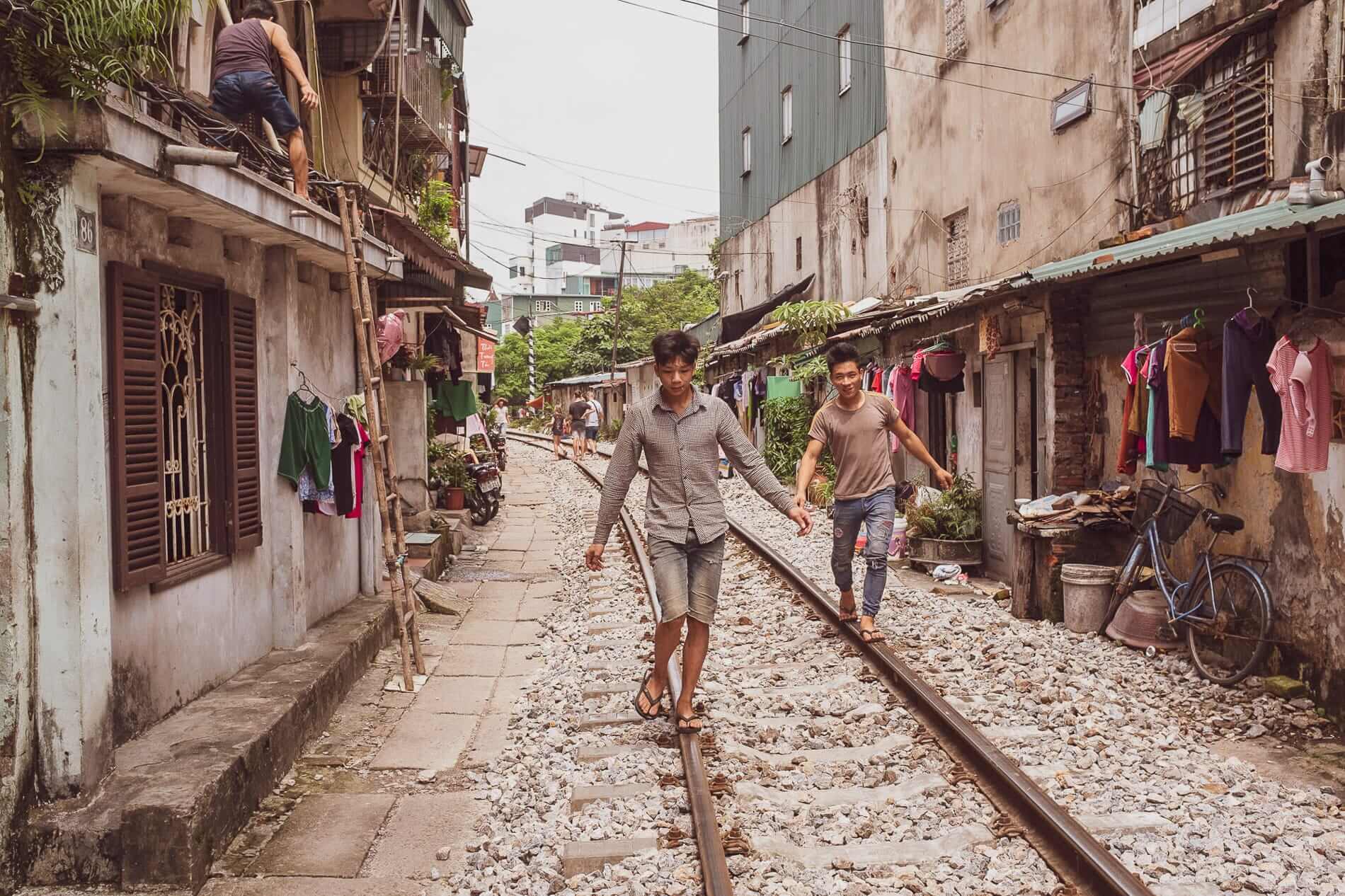 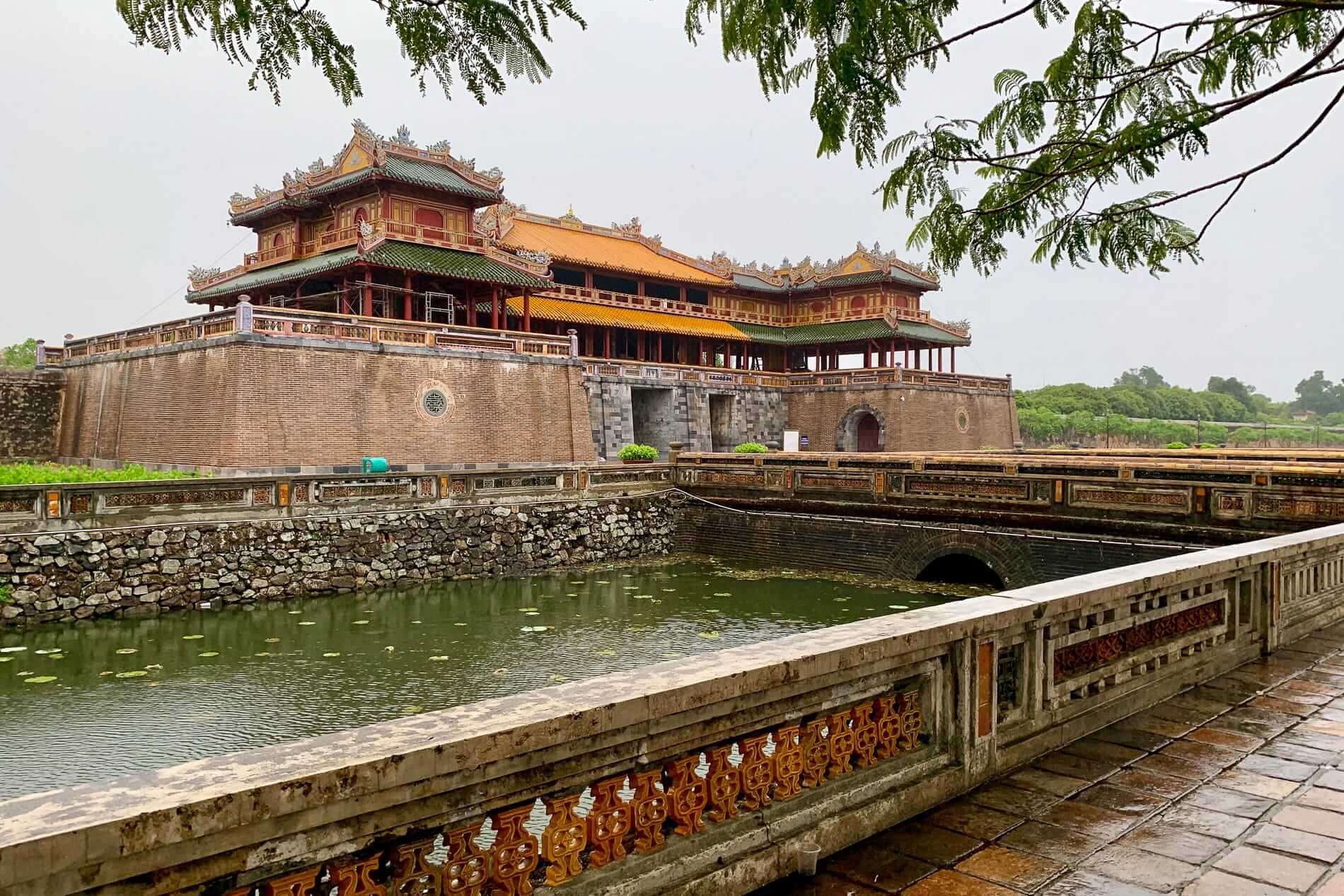 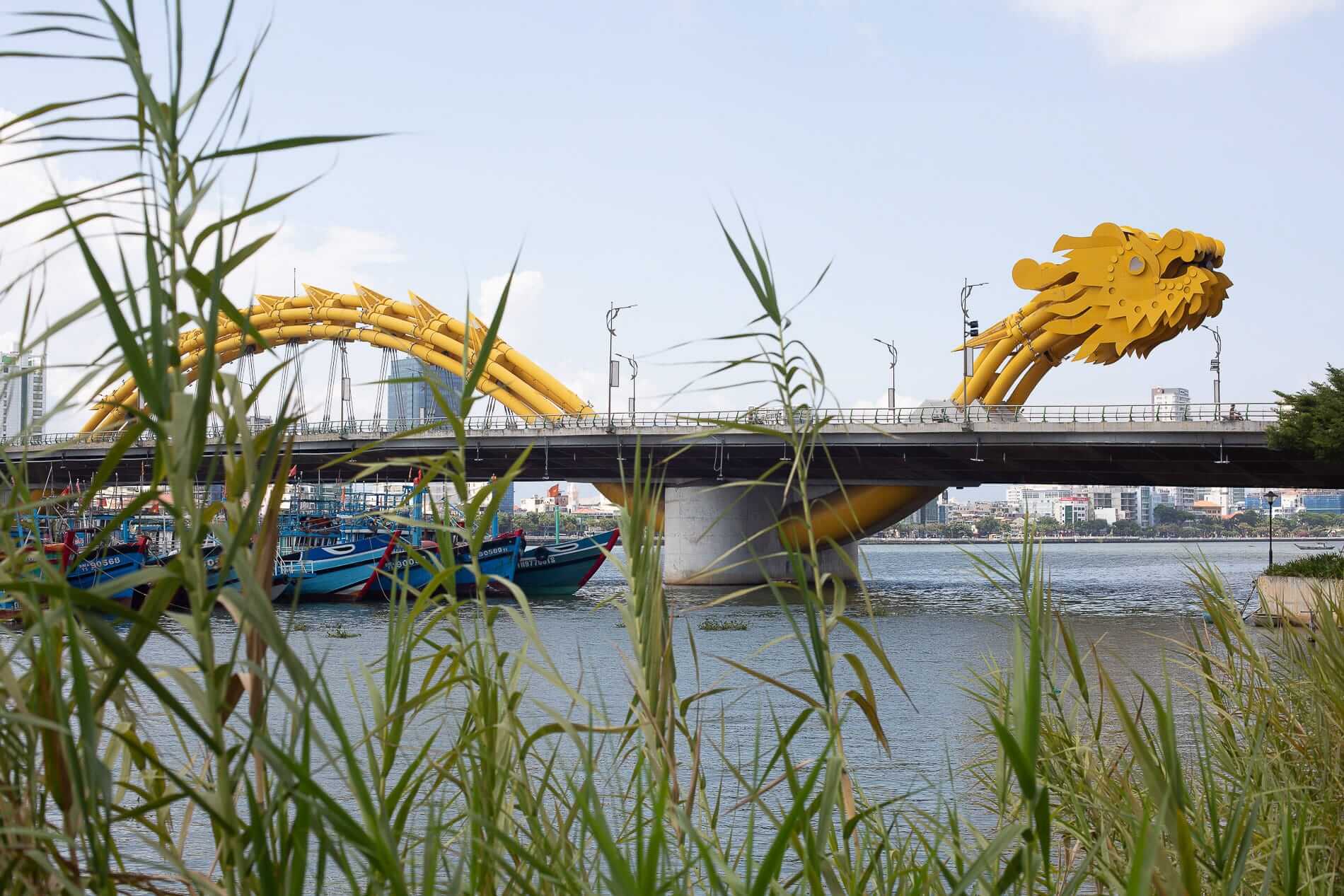